Complete the form below to receive the latest headlines and analysts' recommendations for Nuance Communications with our free daily email newsletter:

Nuance Communications Inc. (NASDAQ:NUAN) EVP Thomas Beaudoin sold 12,355 shares of the firm’s stock in a transaction dated Friday, November 15th. The shares were sold at an average price of $16.60, for a total value of $205,093.00. Following the sale, the executive vice president now owns 255,884 shares in the company, valued at approximately $4,247,674.40. The transaction was disclosed in a document filed with the Securities & Exchange Commission, which can be accessed through this link.

Nuance Communications (NASDAQ: NUAN) is the pioneer and leader in conversational AI innovations that bring intelligence to everyday work and life. The company delivers solutions that understand, analyze, and respond to people – amplifying human intelligence to increase productivity and security. With decades of domain and AI expertise, Nuance works with thousands of organizations globally across healthcare, financial services, telecommunications, government, and retail – to create stronger relationships and better experiences for their customers and workforce. 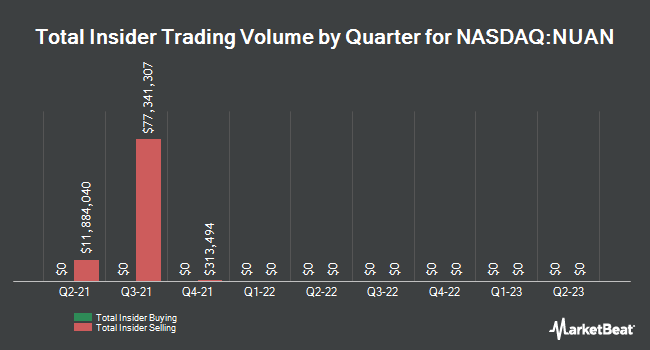