Complete the form below to receive the latest headlines and analysts' recommendations for TherapeuticsMD with our free daily email newsletter:

Shares of TherapeuticsMD Inc (NASDAQ:TXMD) have been given an average recommendation of “Buy” by the thirteen analysts that are covering the company, MarketBeat.com reports. One investment analyst has rated the stock with a sell rating, three have issued a hold rating and nine have assigned a buy rating to the company. The average twelve-month price objective among brokers that have issued a report on the stock in the last year is $9.60.

TherapeuticsMD (NASDAQ:TXMD) last issued its earnings results on Wednesday, November 6th. The company reported ($0.13) EPS for the quarter, beating the Zacks’ consensus estimate of ($0.19) by $0.06. TherapeuticsMD had a negative net margin of 427.70% and a negative return on equity of 430.28%. The business had revenue of $8.21 million for the quarter, compared to the consensus estimate of $8.05 million. During the same quarter last year, the firm posted ($0.16) EPS. The business’s revenue for the quarter was up 136.6% compared to the same quarter last year. Equities research analysts expect that TherapeuticsMD will post -0.69 EPS for the current fiscal year.

TherapeuticsMD, Inc operates as a women's health care product company in the United States. The company's hormone therapy drug candidate is the TX-002HR, a natural progesterone formulation for the treatment of secondary amenorrhea without the potentially allergenic component of peanut oil. Its preclinical projects include the development of TX-005HR, a topical progesterone cream; TX-006HR, an estradiol and progesterone topical cream to penetrate human skin; and TX-00THR and TX-0008HR, which are transdermal patch forms.

Recommended Story: What is the yield curve? 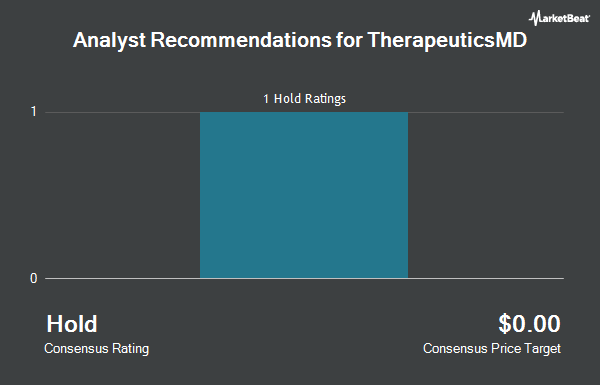