Complete the form below to receive the latest headlines and analysts' recommendations for Puma Biotechnology with our free daily email newsletter:

Analysts at HC Wainwright started coverage on shares of Puma Biotechnology (NASDAQ:PBYI) in a research report issued on Friday, The Fly reports. The brokerage set a “buy” rating on the biopharmaceutical company’s stock.

Puma Biotechnology (NASDAQ:PBYI) last posted its quarterly earnings data on Wednesday, November 6th. The biopharmaceutical company reported ($0.44) EPS for the quarter, topping the Zacks’ consensus estimate of ($0.76) by $0.32. The company had revenue of $56.40 million during the quarter, compared to the consensus estimate of $60.21 million. Puma Biotechnology had a negative net margin of 33.90% and a negative return on equity of 325.89%. The company’s quarterly revenue was down 9.9% on a year-over-year basis. During the same period in the prior year, the business posted $0.16 EPS. On average, analysts anticipate that Puma Biotechnology will post -2.15 earnings per share for the current fiscal year. 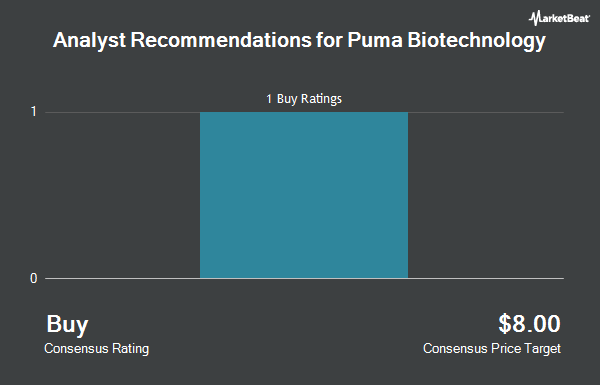