Complete the form below to receive the latest headlines and analysts' recommendations for Marks and Spencer Group with our free daily email newsletter:

The company also recently announced a dividend, which will be paid on Friday, January 10th. Investors of record on Thursday, November 14th will be issued a GBX 3.90 ($0.05) dividend. This represents a yield of 2.14%. The ex-dividend date of this dividend is Thursday, November 14th. Marks and Spencer Group’s dividend payout ratio is currently 2.20%.

About Marks and Spencer Group

Marks and Spencer Group plc operates various retail stores. It offers food products; and womenswear, menswear, kids wear, lingerie, and beauty and home products through its stores and online. The company operates 1463 stores, including 253 owned and 383 franchise Simply Food stores; and 343 full-line and outlet stores in the United Kingdom.

Recommended Story: What is a Reverse Stock Split? 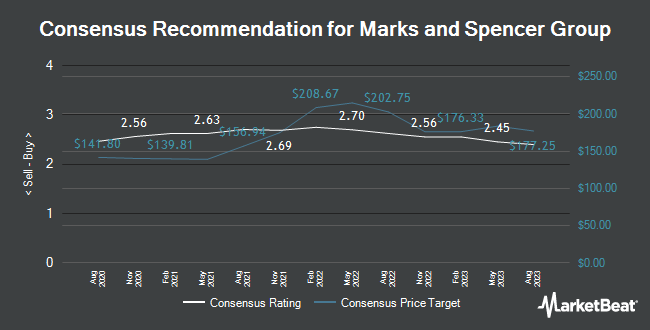