Complete the form below to receive the latest headlines and analysts' recommendations for Yext with our free daily email newsletter:

Tower Research Capital LLC TRC cut its position in Yext Inc (NYSE:YEXT) by 53.9% during the third quarter, according to its most recent 13F filing with the Securities and Exchange Commission. The fund owned 1,840 shares of the company’s stock after selling 2,147 shares during the quarter. Tower Research Capital LLC TRC’s holdings in Yext were worth $29,000 at the end of the most recent reporting period.

Yext (NYSE:YEXT) last issued its earnings results on Thursday, December 5th. The company reported ($0.19) EPS for the quarter, topping the consensus estimate of ($0.32) by $0.13. The firm had revenue of $76.40 million during the quarter, compared to analysts’ expectations of $76.37 million. Yext had a negative return on equity of 57.48% and a negative net margin of 33.57%. Yext’s quarterly revenue was up 30.4% compared to the same quarter last year. During the same period last year, the business earned ($0.12) earnings per share. Equities analysts forecast that Yext Inc will post -0.97 earnings per share for the current fiscal year.

Yext, Inc provides a knowledge engine platform that lets businesses manage their digital knowledge in the cloud and synchronize it to its knowledge network in North America and internationally. The company offers Yext Knowledge Engine, a cloud-based global platform that enables businesses to control and manage their digital knowledge and make it available through its knowledge Network of approximately 150 third-party maps, apps, search engines, intelligent GPS systems, digital assistants, vertical directories, and social networks.

See Also: How is the LIBOR rate calculated? 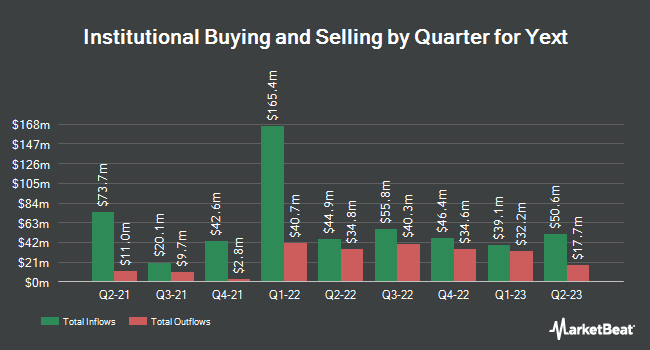 Receive News & Ratings for Yext Daily - Enter your email address below to receive a concise daily summary of the latest news and analysts' ratings for Yext and related companies with MarketBeat.com's FREE daily email newsletter.

DecentBet Trading Down 5.8% Over Last 7 Days

ToaCoin Trading Up 7% Over Last Week