Complete the form below to receive the latest headlines and analysts' recommendations for Berry Petroleum with our free daily email newsletter:

Berry Petroleum Company LLC (NASDAQ:BRY) declared a dividend on Thursday, November 7th, Fidelity reports. Investors of record on Friday, December 13th will be paid a dividend of 0.12 per share by the energy company on Wednesday, January 15th. The ex-dividend date is Thursday, December 12th.

Berry Petroleum (NASDAQ:BRY) last released its quarterly earnings results on Thursday, November 7th. The energy company reported $0.40 earnings per share (EPS) for the quarter, topping the consensus estimate of $0.39 by $0.01. Berry Petroleum had a return on equity of 11.49% and a net margin of 25.26%. The business had revenue of $194.67 million during the quarter, compared to the consensus estimate of $160.70 million. As a group, sell-side analysts anticipate that Berry Petroleum will post 1.35 EPS for the current year.

Read More: The Discount Rate – What You Need to Know 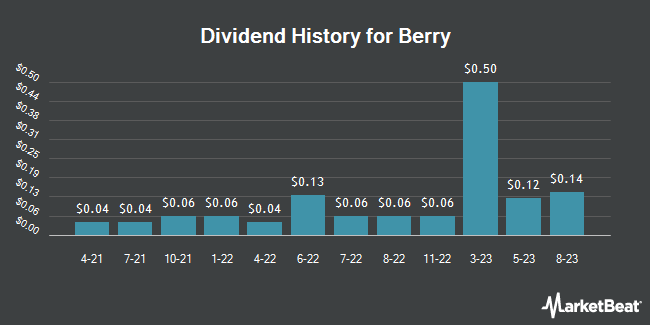