Oxford Industries (NYSE:OXM) released its earnings results on Wednesday. The textile maker reported $0.10 earnings per share for the quarter, beating the consensus estimate of $0.08 by $0.02, Bloomberg Earnings reports. The business had revenue of $241.22 million for the quarter, compared to the consensus estimate of $240.34 million. Oxford Industries had a return on equity of 15.05% and a net margin of 6.27%. The business’s quarterly revenue was up 3.2% compared to the same quarter last year. During the same quarter last year, the business posted $0.14 earnings per share.

In related news, EVP Scott Grassmyer sold 2,838 shares of Oxford Industries stock in a transaction that occurred on Monday, September 16th. The stock was sold at an average price of $73.07, for a total transaction of $207,372.66. Following the transaction, the executive vice president now owns 33,311 shares in the company, valued at $2,434,034.77. The sale was disclosed in a document filed with the SEC, which is accessible through this link. Company insiders own 3.10% of the company’s stock. 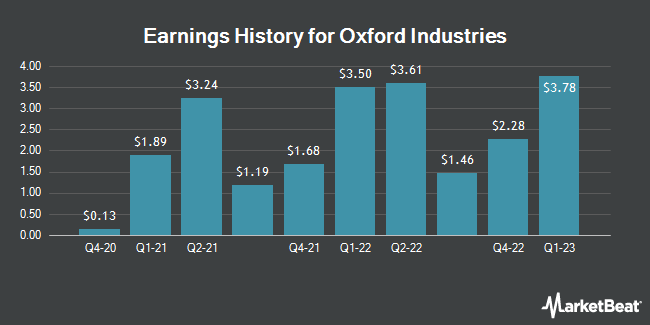