Complete the form below to receive the latest headlines and analysts' recommendations for Carrizo Oil & Gas with our free daily email newsletter:

Analysts expect Carrizo Oil & Gas Inc (NASDAQ:CRZO) to report earnings per share of $0.66 for the current fiscal quarter, according to Zacks Investment Research. Seven analysts have provided estimates for Carrizo Oil & Gas’ earnings, with the highest EPS estimate coming in at $0.82 and the lowest estimate coming in at $0.49. Carrizo Oil & Gas reported earnings of $0.56 per share in the same quarter last year, which suggests a positive year-over-year growth rate of 17.9%. The firm is scheduled to issue its next earnings results on Monday, February 24th.

On average, analysts expect that Carrizo Oil & Gas will report full-year earnings of $2.53 per share for the current fiscal year, with EPS estimates ranging from $2.28 to $2.80. For the next fiscal year, analysts forecast that the company will post earnings of $2.51 per share, with EPS estimates ranging from $2.06 to $3.21. Zacks’ earnings per share calculations are a mean average based on a survey of research analysts that that provide coverage for Carrizo Oil & Gas.

Carrizo Oil & Gas (NASDAQ:CRZO) last released its earnings results on Monday, November 4th. The oil and gas producer reported $0.69 earnings per share for the quarter, beating analysts’ consensus estimates of $0.66 by $0.03. The firm had revenue of $256.99 million during the quarter, compared to the consensus estimate of $261.67 million. Carrizo Oil & Gas had a return on equity of 19.61% and a net margin of 61.01%.

In other Carrizo Oil & Gas news, Director Steven A. Webster acquired 25,000 shares of the company’s stock in a transaction that occurred on Friday, November 29th. The stock was acquired at an average cost of $6.41 per share, for a total transaction of $160,250.00. Following the transaction, the director now directly owns 2,895,988 shares in the company, valued at $18,563,283.08. The acquisition was disclosed in a document filed with the Securities & Exchange Commission, which is accessible through this hyperlink. Also, CEO S P. Iv Johnson sold 8,000 shares of the company’s stock in a transaction on Monday, September 16th. The stock was sold at an average price of $9.83, for a total value of $78,640.00. Following the sale, the chief executive officer now owns 171,221 shares of the company’s stock, valued at $1,683,102.43. The disclosure for this sale can be found here. 4.80% of the stock is owned by corporate insiders.

Carrizo Oil & Gas, Inc, an energy company, explores for, develops, and produces crude oil, natural gas liquids, and gas from resource plays primarily in the United States. The company holds interests in oil and gas plays, including the Eagle Ford Shale in South Texas; and the Permian Basin in West Texas. 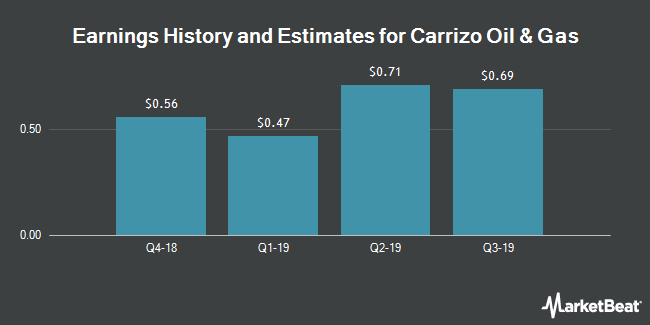