Complete the form below to receive the latest headlines and analysts' recommendations for WEC Energy Group with our free daily email newsletter:

WEC Energy Group Inc (NYSE:WEC) has received an average rating of “Hold” from the thirteen analysts that are presently covering the company, MarketBeat Ratings reports. Four research analysts have rated the stock with a sell rating, six have assigned a hold rating and three have issued a buy rating on the company. The average 12-month price objective among brokerages that have covered the stock in the last year is $85.11.

WEC Energy Group (NYSE:WEC) last issued its quarterly earnings data on Wednesday, November 6th. The utilities provider reported $0.74 earnings per share (EPS) for the quarter, topping analysts’ consensus estimates of $0.71 by $0.03. WEC Energy Group had a return on equity of 10.91% and a net margin of 14.32%. The company had revenue of $1.61 billion during the quarter, compared to analysts’ expectations of $1.68 billion. During the same quarter in the previous year, the company posted $0.74 earnings per share. The business’s revenue was down 2.2% on a year-over-year basis. On average, sell-side analysts expect that WEC Energy Group will post 3.53 earnings per share for the current fiscal year.

The company also recently disclosed a quarterly dividend, which will be paid on Sunday, March 1st. Shareholders of record on Friday, February 14th will be given a dividend of $0.6325 per share. This is an increase from WEC Energy Group’s previous quarterly dividend of $0.59. This represents a $2.53 annualized dividend and a yield of 2.84%. The ex-dividend date of this dividend is Thursday, February 13th. WEC Energy Group’s payout ratio is currently 70.66%.

In other WEC Energy Group news, Director Barbara L. Bowles sold 1,000 shares of the business’s stock in a transaction that occurred on Monday, November 11th. The shares were sold at an average price of $88.07, for a total transaction of $88,070.00. 0.75% of the stock is owned by insiders. 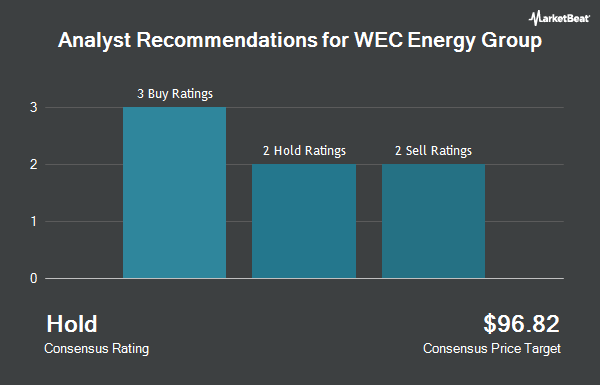