Complete the form below to receive the latest headlines and analysts' recommendations for Synlogic with our free daily email newsletter:

Brokerages expect Synlogic Inc (NASDAQ:SYBX) to announce sales of $640,000.00 for the current fiscal quarter, according to Zacks. Five analysts have made estimates for Synlogic’s earnings, with the lowest sales estimate coming in at $300,000.00 and the highest estimate coming in at $1.60 million. Synlogic posted sales of $110,000.00 in the same quarter last year, which would indicate a positive year over year growth rate of 481.8%. The company is scheduled to report its next quarterly earnings report on Tuesday, March 10th.

Synlogic (NASDAQ:SYBX) last released its quarterly earnings results on Tuesday, November 12th. The biotechnology company reported ($0.39) earnings per share (EPS) for the quarter, beating the Zacks’ consensus estimate of ($0.48) by $0.09. The company had revenue of $0.31 million for the quarter, compared to the consensus estimate of $0.46 million. Synlogic had a negative net margin of 4,574.82% and a negative return on equity of 34.49%.

Synlogic, Inc a clinical-stage biopharmaceutical company, focuses on the discovery and development of synthetic biotic medicines to treat metabolic, inflammatory, and cancer diseases in the United States. Its lead therapeutic programs include SYNB1020, an oral therapy for the treatment of hyperammonemia, which includes patients with liver diseases, such as hepatic encephalopathy, as well as patients with urea cycle disorders; and SYNB1618, an oral therapy that is in Phase I/IIa clinical trial to treat phenylketonuria. 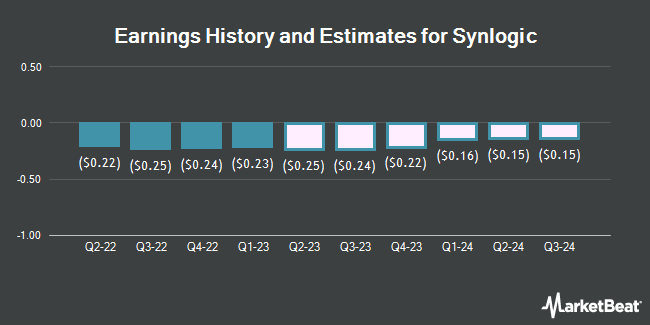 Receive News & Ratings for Synlogic Daily - Enter your email address below to receive a concise daily summary of the latest news and analysts' ratings for Synlogic and related companies with MarketBeat.com's FREE daily email newsletter.

TEMCO Trading Down 12.4% Over Last Week