Heico (NYSE:HEI) issued its earnings results on Monday. The aerospace company reported $0.62 EPS for the quarter, beating the Thomson Reuters’ consensus estimate of $0.57 by $0.05, Briefing.com reports. The firm had revenue of $541.53 million during the quarter, compared to the consensus estimate of $529.56 million. Heico had a net margin of 15.55% and a return on equity of 18.58%. The business’s quarterly revenue was up 13.6% on a year-over-year basis. During the same quarter in the prior year, the firm earned $0.49 earnings per share.

A number of equities analysts have recently weighed in on the stock. Canaccord Genuity reissued a “buy” rating and set a $150.00 price target (down from $160.00) on shares of Heico in a research report on Wednesday. ValuEngine raised shares of Heico from a “sell” rating to a “hold” rating in a report on Friday, November 1st. SunTrust Banks lowered their price objective on shares of Heico from $160.00 to $150.00 and set a “buy” rating for the company in a research report on Wednesday. UBS Group dropped their price objective on Heico from $121.00 to $115.00 and set a “sell” rating on the stock in a research note on Wednesday. Finally, Credit Suisse Group lifted their target price on Heico from $133.00 to $163.00 and gave the stock an “outperform” rating in a report on Thursday, August 29th. They noted that the move was a valuation call. Two equities research analysts have rated the stock with a sell rating, two have assigned a hold rating and six have assigned a buy rating to the company’s stock. The stock presently has a consensus rating of “Hold” and an average target price of $128.33. 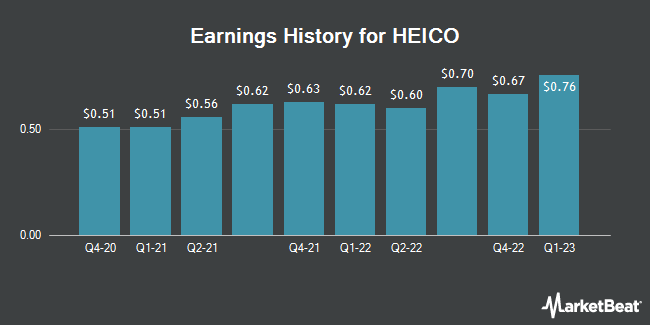