Complete the form below to receive the latest headlines and analysts' recommendations for 3D Systems with our free daily email newsletter:

Shares of 3D Systems Co. (NYSE:DDD) have been given an average recommendation of “Hold” by the eight brokerages that are currently covering the company, MarketBeat reports. Two research analysts have rated the stock with a sell rating, one has given a hold rating and four have issued a buy rating on the company. The average twelve-month price target among analysts that have updated their coverage on the stock in the last year is $9.67.

In other 3D Systems news, EVP Andrew Martin Johnson sold 20,068 shares of 3D Systems stock in a transaction that occurred on Wednesday, November 6th. The shares were sold at an average price of $9.62, for a total transaction of $193,054.16. Following the transaction, the executive vice president now directly owns 196,180 shares of the company’s stock, valued at $1,887,251.60. The transaction was disclosed in a legal filing with the Securities & Exchange Commission, which is available at this hyperlink. Insiders own 3.30% of the company’s stock.

3D Systems (NYSE:DDD) last announced its earnings results on Wednesday, October 30th. The 3D printing company reported ($0.14) earnings per share (EPS) for the quarter, missing the consensus estimate of ($0.12) by ($0.02). 3D Systems had a negative net margin of 10.74% and a negative return on equity of 9.77%. The company had revenue of $155.27 million for the quarter, compared to the consensus estimate of $152.22 million. Sell-side analysts predict that 3D Systems will post -0.41 EPS for the current year.

Featured Article: Why does a company issue an IPO? 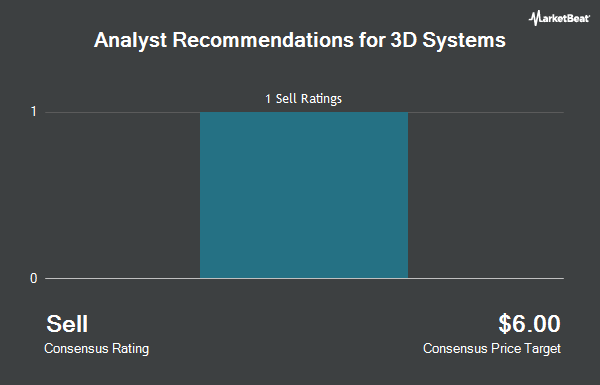 3D Systems Co. Given Average Rating of “Hold” by Analysts

$303.79 Million in Sales Expected for Umpqua Holdings Corp This Quarter