Equities analysts expect Warrior Met Coal Inc (NYSE:HCC) to report sales of $204.70 million for the current quarter, Zacks reports. Two analysts have issued estimates for Warrior Met Coal’s earnings, with the highest sales estimate coming in at $207.42 million and the lowest estimate coming in at $201.97 million. Warrior Met Coal reported sales of $360.36 million in the same quarter last year, which would suggest a negative year-over-year growth rate of 43.2%. The company is scheduled to announce its next earnings results after the market closes on Wednesday, February 19th.

On average, analysts expect that Warrior Met Coal will report full-year sales of $1.26 billion for the current financial year, with estimates ranging from $1.23 billion to $1.27 billion. For the next year, analysts expect that the company will report sales of $1.06 billion, with estimates ranging from $1.01 billion to $1.11 billion. Zacks’ sales averages are a mean average based on a survey of sell-side research analysts that that provide coverage for Warrior Met Coal.

Warrior Met Coal (NYSE:HCC) last announced its quarterly earnings results on Wednesday, October 30th. The company reported $0.79 earnings per share (EPS) for the quarter, missing the Zacks’ consensus estimate of $0.82 by ($0.03). The business had revenue of $287.51 million for the quarter, compared to analyst estimates of $254.37 million. Warrior Met Coal had a return on equity of 52.94% and a net margin of 46.01%. The company’s revenue was up 5.2% compared to the same quarter last year. During the same quarter last year, the firm posted $1.06 EPS.

Several analysts have recently weighed in on HCC shares. Clarkson Capital restated a “buy” rating on shares of Warrior Met Coal in a report on Monday, September 23rd. ValuEngine lowered Warrior Met Coal from a “hold” rating to a “sell” rating in a report on Tuesday, December 17th. Finally, Zacks Investment Research upgraded Warrior Met Coal from a “sell” rating to a “hold” rating in a report on Wednesday, January 1st. One analyst has rated the stock with a sell rating, four have given a hold rating and four have assigned a buy rating to the company’s stock. The stock currently has an average rating of “Hold” and a consensus price target of $31.71. 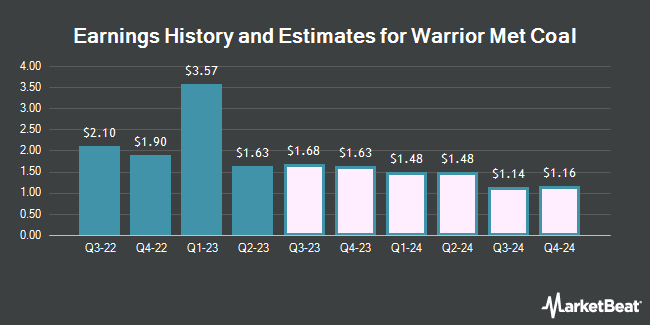