Complete the form below to receive the latest headlines and analysts' recommendations for QuinStreet with our free daily email newsletter:

QuinStreet Inc (NASDAQ:QNST) has been assigned a consensus recommendation of “Buy” from the eight research firms that are currently covering the company, MarketBeat.com reports. One analyst has rated the stock with a sell rating and seven have issued a buy rating on the company. The average 12-month price target among analysts that have covered the stock in the last year is $18.00.

QuinStreet (NASDAQ:QNST) last issued its earnings results on Thursday, November 7th. The technology company reported $0.02 earnings per share (EPS) for the quarter, missing the consensus estimate of $0.07 by ($0.05). QuinStreet had a return on equity of 4.07% and a net margin of 12.44%. The firm had revenue of $126.61 million during the quarter, compared to the consensus estimate of $121.65 million. As a group, equities analysts predict that QuinStreet will post 0.35 EPS for the current fiscal year.

QuinStreet, Inc, an Internet performance marketing company, provides customer acquisition services for its clients in the United States and internationally. It offers online marketing services to its clients in the form of qualified leads, inquiries, clicks, calls, applications, customers, display advertisements, or impressions through its Websites or third-party publishers. 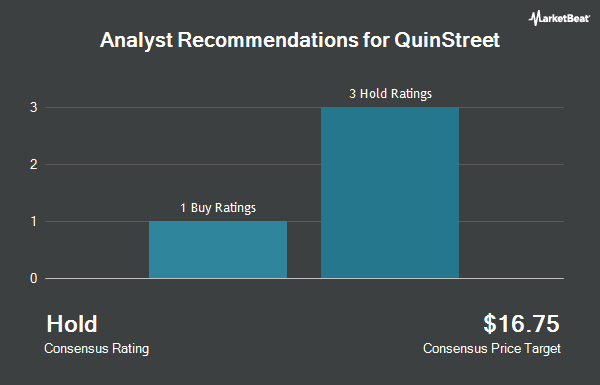