BidaskClub downgraded shares of Sanderson Farms (NASDAQ:SAFM) from a hold rating to a sell rating in a report released on Saturday, BidAskClub reports.

Sanderson Farms (NASDAQ:SAFM) last posted its quarterly earnings data on Thursday, December 19th. The company reported ($0.95) earnings per share for the quarter, topping the consensus estimate of ($1.33) by $0.38. Sanderson Farms had a return on equity of 3.94% and a net margin of 1.55%. The business had revenue of $906.50 million during the quarter, compared to analysts’ expectations of $888.65 million. During the same quarter in the previous year, the firm earned ($1.63) EPS. The firm’s revenue was up 13.6% compared to the same quarter last year. As a group, equities research analysts forecast that Sanderson Farms will post 11.07 EPS for the current fiscal year.

Featured Story: What economic reports are most valuable to investors? 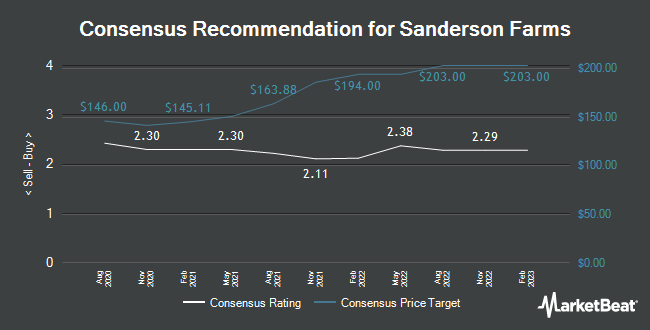