Complete the form below to receive the latest headlines and analysts' recommendations for Krystal Biotech with our free daily email newsletter:

Equities analysts expect Krystal Biotech Inc (NASDAQ:KRYS) to announce earnings per share (EPS) of ($0.32) for the current quarter, according to Zacks Investment Research. Zero analysts have made estimates for Krystal Biotech’s earnings, with estimates ranging from ($0.35) to ($0.29). Krystal Biotech posted earnings per share of ($0.28) in the same quarter last year, which indicates a negative year over year growth rate of 14.3%. The firm is expected to issue its next earnings results on Tuesday, March 10th.

According to Zacks, analysts expect that Krystal Biotech will report full year earnings of ($1.25) per share for the current financial year, with EPS estimates ranging from ($1.35) to ($1.18). For the next fiscal year, analysts forecast that the company will post earnings of ($2.30) per share, with EPS estimates ranging from ($3.70) to ($1.61). Zacks Investment Research’s EPS averages are a mean average based on a survey of sell-side research analysts that that provide coverage for Krystal Biotech.

Krystal Biotech, Inc, a gene therapy company, develops and commercializes pharmaceutical products for patients suffering from dermatological diseases in the United States. The company's lead product candidate is KB103, which is in Phase II of a Phase I/II clinical study to treat dystrophic epidermolysis bullosa, a genetic disease. 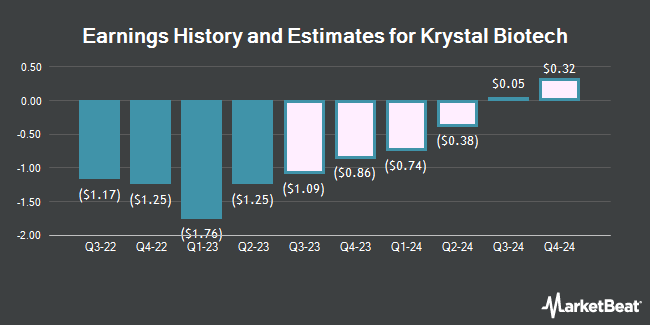 Wacoal Lifted to Hold at ValuEngine