Complete the form below to receive the latest headlines and analysts' recommendations for CDK Global with our free daily email newsletter:

Equities research analysts predict that CDK Global Inc (NASDAQ:CDK) will announce $492.30 million in sales for the current fiscal quarter, Zacks Investment Research reports. Three analysts have issued estimates for CDK Global’s earnings. The lowest sales estimate is $483.70 million and the highest is $497.80 million. CDK Global reported sales of $590.40 million in the same quarter last year, which would indicate a negative year-over-year growth rate of 16.6%. The company is expected to announce its next quarterly earnings report after the market closes on Tuesday, February 4th.

According to Zacks, analysts expect that CDK Global will report full year sales of $2.02 billion for the current financial year, with estimates ranging from $2.01 billion to $2.04 billion. For the next financial year, analysts forecast that the business will post sales of $2.12 billion, with estimates ranging from $2.10 billion to $2.14 billion. Zacks’ sales averages are an average based on a survey of research firms that cover CDK Global.

CDK Global (NASDAQ:CDK) last released its quarterly earnings results on Tuesday, November 5th. The software maker reported $0.79 earnings per share (EPS) for the quarter, topping the consensus estimate of $0.69 by $0.10. CDK Global had a negative return on equity of 72.27% and a net margin of 5.32%. The business had revenue of $494.60 million during the quarter, compared to the consensus estimate of $485.00 million. During the same quarter in the previous year, the company posted $0.89 EPS. The business’s revenue was up 10.8% on a year-over-year basis.

The company also recently disclosed a quarterly dividend, which was paid on Monday, December 30th. Stockholders of record on Monday, December 2nd were given a $0.15 dividend. This represents a $0.60 dividend on an annualized basis and a dividend yield of 1.10%. The ex-dividend date of this dividend was Friday, November 29th. CDK Global’s dividend payout ratio is presently 19.11%.

In other news, General Counsel Lee J. Brunz sold 1,000 shares of the firm’s stock in a transaction on Monday, December 16th. The stock was sold at an average price of $55.32, for a total transaction of $55,320.00. Following the sale, the general counsel now owns 41,569 shares in the company, valued at $2,299,597.08. The transaction was disclosed in a legal filing with the Securities & Exchange Commission, which is available through the SEC website. Insiders have sold 3,000 shares of company stock worth $163,340 in the last three months. Insiders own 0.36% of the company’s stock.

Featured Article: How does a security become overbought? 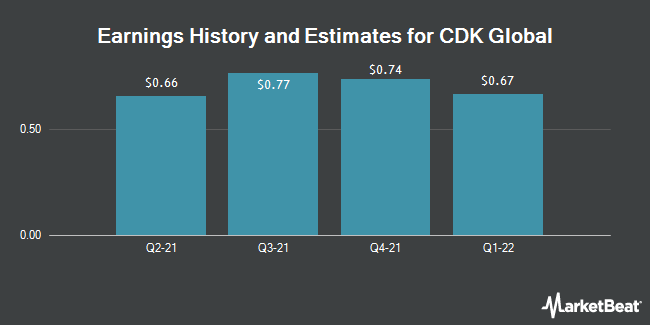