Complete the form below to receive the latest headlines and analysts' recommendations for Alkermes with our free daily email newsletter:

JPMorgan Chase & Co. lowered shares of Alkermes (NASDAQ:ALKS) from an overweight rating to a neutral rating in a report released on Thursday, BenzingaRatingsTable reports. They currently have $21.00 price objective on the stock, down from their prior price objective of $25.00.

Alkermes (NASDAQ:ALKS) last issued its quarterly earnings data on Thursday, February 13th. The company reported $0.83 earnings per share for the quarter, topping the Zacks’ consensus estimate of $0.65 by $0.18. Alkermes had a negative net margin of 18.71% and a negative return on equity of 6.08%. The business had revenue of $412.70 million during the quarter, compared to analysts’ expectations of $404.45 million. During the same period in the previous year, the company earned $0.34 earnings per share. Alkermes’s revenue for the quarter was up 30.7% on a year-over-year basis. As a group, equities analysts forecast that Alkermes will post -0.16 earnings per share for the current fiscal year.

Read More: How is the LIBOR rate calculated? 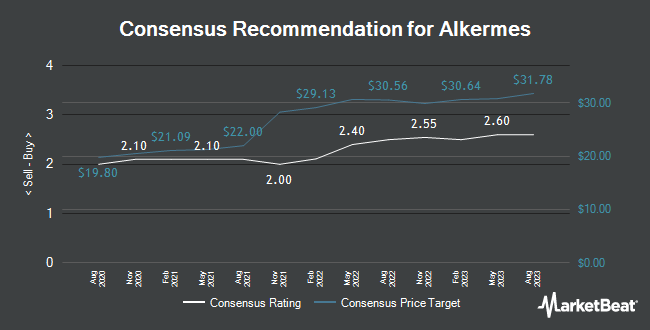 Receive News & Ratings for Alkermes Daily - Enter your email address below to receive a concise daily summary of the latest news and analysts' ratings for Alkermes and related companies with MarketBeat.com's FREE daily email newsletter.