Complete the form below to receive the latest headlines and analysts' recommendations for First Financial Bancorp with our free daily email newsletter:

Paragon Capital Management Ltd lowered its holdings in First Financial Bancorp (NASDAQ:FFBC) by 12.5% in the fourth quarter, according to the company in its most recent disclosure with the SEC. The firm owned 9,607 shares of the bank’s stock after selling 1,373 shares during the quarter. Paragon Capital Management Ltd’s holdings in First Financial Bancorp were worth $244,000 as of its most recent filing with the SEC.

In related news, Chairman Claude E. Davis sold 25,000 shares of the business’s stock in a transaction dated Monday, December 9th. The shares were sold at an average price of $24.52, for a total value of $613,000.00. Following the completion of the transaction, the chairman now owns 304,860 shares of the company’s stock, valued at approximately $7,475,167.20. The sale was disclosed in a filing with the Securities & Exchange Commission, which is available at the SEC website. Insiders own 2.00% of the company’s stock.

First Financial Bancorp (NASDAQ:FFBC) last released its quarterly earnings results on Thursday, January 23rd. The bank reported $0.52 earnings per share (EPS) for the quarter, missing the consensus estimate of $0.54 by ($0.02). First Financial Bancorp had a return on equity of 9.56% and a net margin of 26.81%. The firm had revenue of $155.67 million for the quarter, compared to analyst estimates of $155.33 million. During the same period last year, the firm earned $0.61 EPS. The company’s quarterly revenue was up .1% compared to the same quarter last year. On average, equities research analysts expect that First Financial Bancorp will post 2.02 earnings per share for the current year.

The company also recently announced a quarterly dividend, which will be paid on Monday, March 16th. Investors of record on Monday, March 2nd will be paid a $0.23 dividend. This represents a $0.92 annualized dividend and a yield of 3.72%. The ex-dividend date is Friday, February 28th. First Financial Bancorp’s payout ratio is 42.99%.

See Also: Trading based on a resistance level 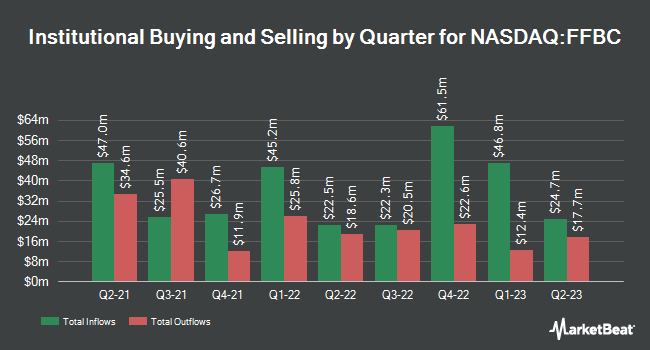