Complete the form below to receive the latest headlines and analysts' recommendations for Peabody Energy with our free daily email newsletter:

Peabody Energy Co. (NYSE:BTU) CEO Glenn L. Kellow sold 2,968 shares of the firm’s stock in a transaction on Wednesday, February 12th. The stock was sold at an average price of $8.22, for a total value of $24,396.96. Following the transaction, the chief executive officer now directly owns 812,720 shares of the company’s stock, valued at $6,680,558.40. The sale was disclosed in a document filed with the SEC, which can be accessed through this hyperlink.

Peabody Energy (NYSE:BTU) last posted its quarterly earnings data on Wednesday, February 5th. The coal producer reported ($0.21) earnings per share for the quarter, topping the Thomson Reuters’ consensus estimate of ($0.97) by $0.76. Peabody Energy had a positive return on equity of 1.83% and a negative net margin of 4.57%. The firm had revenue of $1.12 billion during the quarter, compared to analyst estimates of $1.04 billion. During the same period last year, the company posted $1.97 EPS. The business’s quarterly revenue was down 20.0% on a year-over-year basis. Equities research analysts predict that Peabody Energy Co. will post -1.63 earnings per share for the current fiscal year. 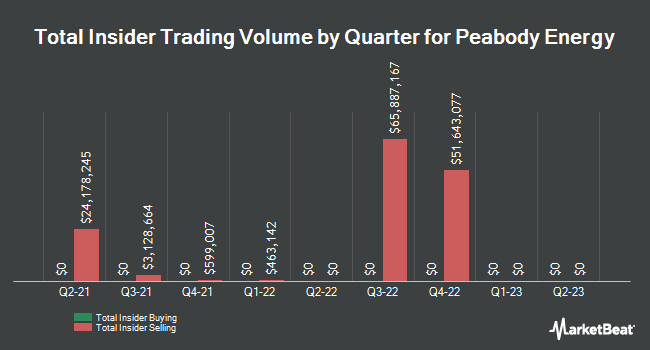