Complete the form below to receive the latest headlines and analysts' recommendations for Enquest with our free daily email newsletter:

Enquest Plc (LON:ENQ) has been given a consensus rating of “Hold” by the six ratings firms that are covering the stock, MarketBeat Ratings reports. One investment analyst has rated the stock with a sell recommendation, three have given a hold recommendation and one has issued a buy recommendation on the company. The average twelve-month price objective among analysts that have covered the stock in the last year is GBX 26.80 ($0.35).

EnQuest PLC, an oil and gas development and production company, together with its subsidiaries, explores for, extracts, and produces hydrocarbons in the United Kingdom Continental Shelf and Malaysia. The company operates through North Sea and Malaysia segments. It primarily holds interests in the Thistle/Deveron, Heather/Broom, the Dons area, Magnus, the Greater Kittiwake Area, Scolty/Crathes, and Alma/Galia; and in the Kraken development, and a non-operated interest in the Alba producing oil field, as well as the PM8/Seligi production sharing contract and the Tanjong Baram risk services contract in Malaysia.

Read More: What causes a recession? 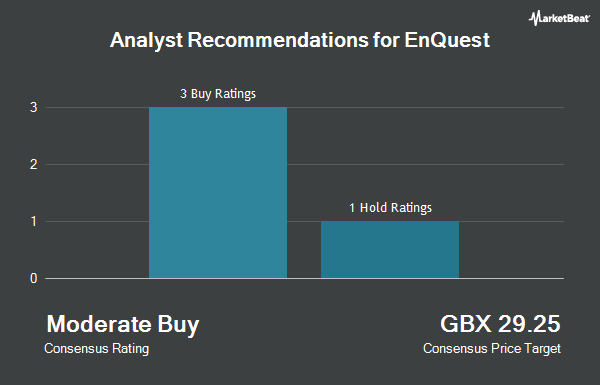 Receive News & Ratings for Enquest Daily - Enter your email address below to receive a concise daily summary of the latest news and analysts' ratings for Enquest and related companies with MarketBeat.com's FREE daily email newsletter.