Complete the form below to receive the latest headlines and analysts' recommendations for Mercury Systems with our free daily email newsletter:

Mercury Systems Inc (NASDAQ:MRCY) CEO Mark Aslett sold 6,250 shares of the company’s stock in a transaction dated Thursday, February 13th. The shares were sold at an average price of $84.77, for a total transaction of $529,812.50. Following the completion of the sale, the chief executive officer now directly owns 303,563 shares in the company, valued at approximately $25,733,035.51. The transaction was disclosed in a legal filing with the Securities & Exchange Commission, which can be accessed through the SEC website.

Mercury Systems (NASDAQ:MRCY) last issued its quarterly earnings data on Tuesday, January 28th. The technology company reported $0.54 earnings per share for the quarter, topping the Thomson Reuters’ consensus estimate of $0.48 by $0.06. The firm had revenue of $193.91 million for the quarter, compared to analysts’ expectations of $193.08 million. Mercury Systems had a net margin of 8.55% and a return on equity of 7.19%. The company’s quarterly revenue was up 21.9% compared to the same quarter last year. During the same period in the prior year, the firm earned $0.47 earnings per share. On average, equities analysts predict that Mercury Systems Inc will post 1.78 earnings per share for the current fiscal year.

Recommended Story: What member countries make up the G-20? 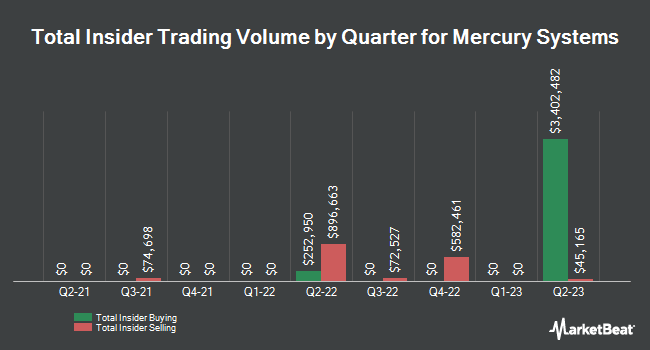