Complete the form below to receive the latest headlines and analysts' recommendations for Madison Square Garden with our free daily email newsletter:

According to Zacks, analysts expect that Madison Square Garden will report full year earnings of ($1.19) per share for the current financial year, with EPS estimates ranging from ($2.23) to ($0.49). For the next financial year, analysts anticipate that the company will report earnings of ($0.61) per share, with EPS estimates ranging from ($1.59) to $0.05. Zacks Investment Research’s earnings per share averages are an average based on a survey of research firms that cover Madison Square Garden.

Madison Square Garden (NYSE:MSG) last released its quarterly earnings data on Friday, February 7th. The company reported $3.93 earnings per share for the quarter, beating the consensus estimate of $2.41 by $1.52. Madison Square Garden had a negative return on equity of 0.90% and a negative net margin of 1.47%. The firm had revenue of $628.80 million during the quarter, compared to the consensus estimate of $635.93 million. During the same period last year, the business posted $3.42 EPS. Madison Square Garden’s quarterly revenue was down .5% on a year-over-year basis. 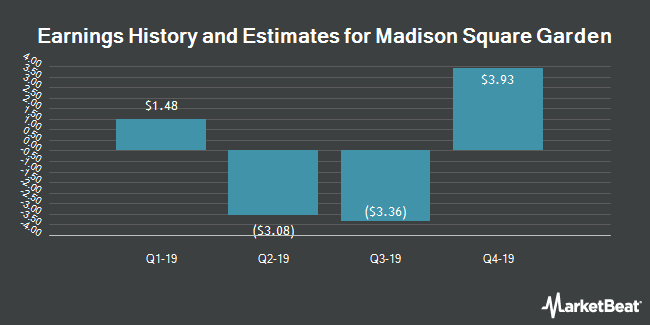 Lear Downgraded to “Sell” at ValuEngine