Complete the form below to receive the latest headlines and analysts' recommendations for Intercept Pharmaceuticals with our free daily email newsletter:

Intercept Pharmaceuticals (NASDAQ:ICPT) released its quarterly earnings results on Tuesday. The biopharmaceutical company reported ($2.99) earnings per share for the quarter, missing the consensus estimate of ($2.52) by ($0.47), Briefing.com reports. The firm had revenue of $71.50 million for the quarter, compared to analysts’ expectations of $68.19 million. Intercept Pharmaceuticals had a negative net margin of 143.09% and a negative return on equity of 495.47%. The business’s quarterly revenue was up 34.2% compared to the same quarter last year. During the same quarter in the prior year, the business earned ($2.97) EPS.

Intercept Pharmaceuticals, Inc, a biopharmaceutical company, focuses on the development and commercialization of therapeutics to treat progressive non-viral liver diseases. It markets Ocaliva, an farnesoid X receptor agonist approved in the United States, the European Union, and other jurisdictions for the treatment of primary biliary cholangitis (PBC) in combination with ursodeoxycholic acid in adults.

Further Reading: What are no-load funds? 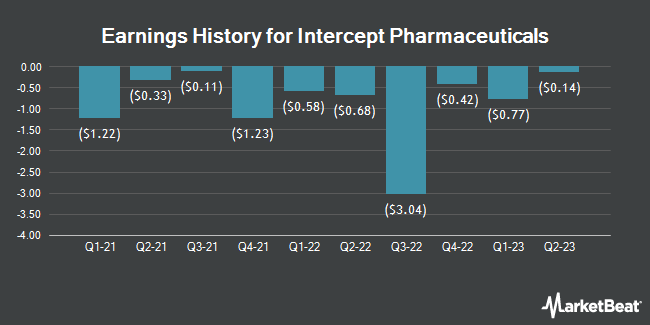