Complete the form below to receive the latest headlines and analysts' recommendations for Icon with our free daily email newsletter:

Shares of Icon Plc (NASDAQ:ICLR) have received an average recommendation of “Hold” from the twelve ratings firms that are presently covering the stock, MarketBeat reports. Seven research analysts have rated the stock with a hold recommendation and five have assigned a buy recommendation to the company. The average twelve-month price target among brokerages that have issued ratings on the stock in the last year is $178.75.

Icon (NASDAQ:ICLR) last announced its quarterly earnings data on Wednesday, February 19th. The medical research company reported $1.83 earnings per share for the quarter, meeting the Thomson Reuters’ consensus estimate of $1.83. The business had revenue of $725.40 million during the quarter, compared to analyst estimates of $734.13 million. Icon had a return on equity of 25.00% and a net margin of 13.33%. The company’s revenue was up 6.8% on a year-over-year basis. During the same quarter in the prior year, the firm posted $1.62 earnings per share. As a group, research analysts forecast that Icon will post 7.74 earnings per share for the current year.

ICON Public Limited Company, a clinical research organization, provides outsourced development services to the pharmaceutical, biotechnology, and medical device industries in Ireland, rest of Europe, the United States, and internationally. It specializes in the strategic development, management, and analysis of programs that support various stages of the clinical development process from compound selection to Phase I-IV clinical studies. 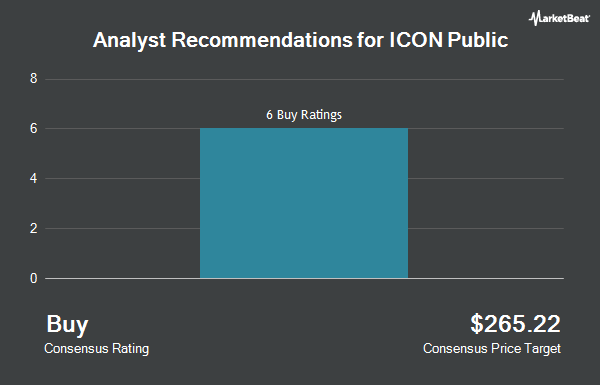 Receive News & Ratings for Icon Daily - Enter your email address below to receive a concise daily summary of the latest news and analysts' ratings for Icon and related companies with MarketBeat.com's FREE daily email newsletter.