Complete the form below to receive the latest headlines and analysts' recommendations for Caesars Entertainment with our free daily email newsletter:

Caesars Entertainment (NASDAQ:CZR) was upgraded by TheStreet from a “d+” rating to a “c” rating in a report released on Tuesday, TheStreetRatingsTable reports.

Caesars Entertainment (NASDAQ:CZR) last released its earnings results on Tuesday, February 25th. The company reported ($0.45) EPS for the quarter, missing analysts’ consensus estimates of ($0.09) by ($0.36). Caesars Entertainment had a negative return on equity of 20.70% and a negative net margin of 13.67%. The business had revenue of $2.17 billion during the quarter, compared to the consensus estimate of $2.13 billion. During the same quarter in the previous year, the firm earned ($0.15) earnings per share. The firm’s revenue for the quarter was up 2.6% compared to the same quarter last year. Research analysts anticipate that Caesars Entertainment will post 0.01 earnings per share for the current fiscal year.

Caesars Entertainment Corporation, through its subsidiaries, provides casino-entertainment and hospitality services in the United States and internationally. The company operates 39,000 slot machines and 2,700 table games, as well as other games comprising keno, poker, and race and sports books; and approximately 180 buffets, restaurants, bars, nightclubs, and lounges located throughout its casinos, as well as banquets and room service. 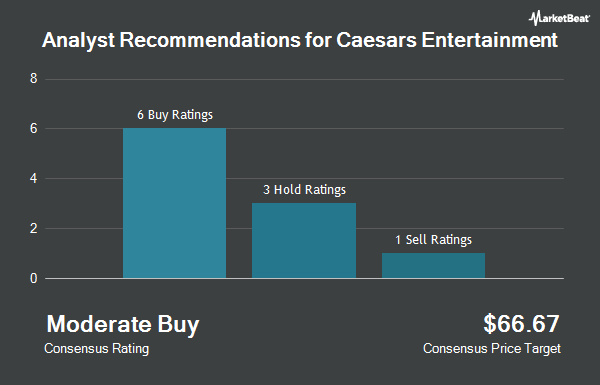