Nexstar Media Group Inc (NASDAQ:NXST) EVP Elizabeth Ryder sold 844 shares of the firm’s stock in a transaction on Monday, March 23rd. The stock was sold at an average price of $44.17, for a total value of $37,279.48. Following the sale, the executive vice president now directly owns 9,557 shares in the company, valued at approximately $422,132.69. The sale was disclosed in a document filed with the SEC, which is available at the SEC website.

Nexstar Media Group (NASDAQ:NXST) last released its quarterly earnings results on Wednesday, February 26th. The company reported $2.36 earnings per share (EPS) for the quarter, missing the Thomson Reuters’ consensus estimate of $3.31 by ($0.95). Nexstar Media Group had a net margin of 7.58% and a return on equity of 13.52%. The firm had revenue of $1.10 billion during the quarter, compared to analyst estimates of $1.07 billion. During the same period in the prior year, the business earned $3.22 EPS. The business’s revenue for the quarter was up 37.9% compared to the same quarter last year. Analysts forecast that Nexstar Media Group Inc will post 17.22 EPS for the current fiscal year.

Further Reading: What does a market perform rating mean? 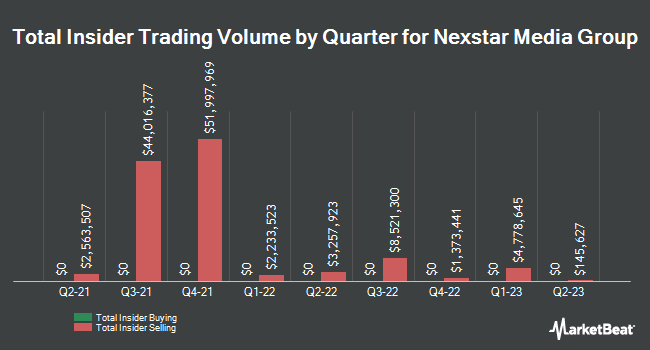