Complete the form below to receive the latest headlines and analysts' recommendations for Penn Virginia with our free daily email newsletter:

Walthausen & Co. LLC reduced its position in Penn Virginia Co. (NASDAQ:PVAC) by 52.2% during the 4th quarter, according to the company in its most recent filing with the Securities and Exchange Commission (SEC). The fund owned 48,346 shares of the company’s stock after selling 52,860 shares during the period. Walthausen & Co. LLC’s holdings in Penn Virginia were worth $1,467,000 at the end of the most recent quarter.

Penn Virginia (NASDAQ:PVAC) last posted its earnings results on Thursday, February 27th. The company reported $2.75 earnings per share (EPS) for the quarter, beating the consensus estimate of $1.92 by $0.83. Penn Virginia had a net margin of 15.00% and a return on equity of 28.43%. The firm had revenue of $123.20 million during the quarter, compared to analysts’ expectations of $121.39 million. On average, research analysts anticipate that Penn Virginia Co. will post 6.82 earnings per share for the current fiscal year.

In related news, major shareholder Strategic Value Partners, Llc sold 100,617 shares of the business’s stock in a transaction on Friday, February 7th. The shares were sold at an average price of $20.55, for a total value of $2,067,679.35. The transaction was disclosed in a legal filing with the Securities & Exchange Commission, which is available through this link. Insiders own 0.36% of the company’s stock.

Penn Virginia Corporation, an independent oil and gas company, engages in the onshore exploration, development, and production of crude oil, natural gas liquids, and natural gas in the United States. It primarily operates wells in the Eagle Ford Shale field in South Texas. As of December 31, 2018, it had total proved reserves of approximately 123 million barrels of oil equivalent; and 460 gross productive wells, as well as owned approximately 98,200 gross acres of leasehold and royalty interests.

See Also: How the Consumer Price Index (CPI) is calculated?

Want to see what other hedge funds are holding PVAC? Visit HoldingsChannel.com to get the latest 13F filings and insider trades for Penn Virginia Co. (NASDAQ:PVAC). 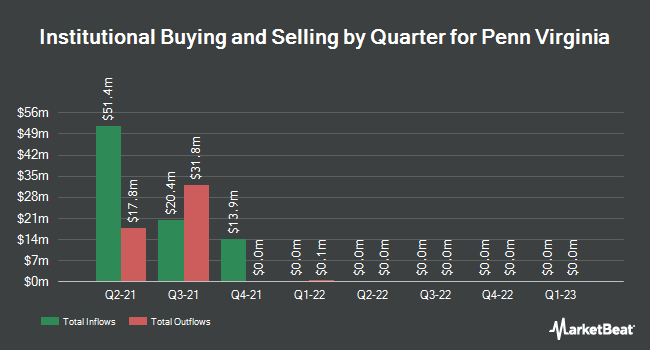