Complete the form below to receive the latest headlines and analysts' recommendations for Stepan with our free daily email newsletter:

Walthausen & Co. LLC cut its stake in shares of Stepan (NYSE:SCL) by 16.8% during the 4th quarter, according to the company in its most recent disclosure with the Securities & Exchange Commission. The institutional investor owned 41,913 shares of the basic materials company’s stock after selling 8,435 shares during the quarter. Walthausen & Co. LLC owned approximately 0.19% of Stepan worth $4,294,000 at the end of the most recent quarter.

Stepan (NYSE:SCL) last posted its earnings results on Thursday, February 20th. The basic materials company reported $1.10 earnings per share for the quarter, topping the consensus estimate of $0.88 by $0.22. The firm had revenue of $444.99 million during the quarter, compared to the consensus estimate of $441.45 million. Stepan had a net margin of 5.55% and a return on equity of 13.89%. The company’s revenue was down 4.6% on a year-over-year basis. During the same quarter last year, the company earned $1.02 earnings per share. As a group, sell-side analysts anticipate that Stepan will post 4.41 earnings per share for the current year.

The firm also recently announced a quarterly dividend, which was paid on Friday, March 13th. Stockholders of record on Thursday, March 5th were paid a $0.275 dividend. The ex-dividend date of this dividend was Wednesday, March 4th. This represents a $1.10 annualized dividend and a dividend yield of 1.29%. Stepan’s payout ratio is 21.48%.

In other Stepan news, VP David Kabbes bought 2,222 shares of Stepan stock in a transaction dated Thursday, March 12th. The stock was purchased at an average price of $71.67 per share, for a total transaction of $159,250.74. Following the completion of the purchase, the vice president now directly owns 2,833 shares of the company’s stock, valued at $203,041.11. The acquisition was disclosed in a legal filing with the SEC, which is available at this hyperlink. 11.40% of the stock is owned by company insiders.

Stepan Company, together with its subsidiaries, produces and sells specialty and intermediate chemicals to other manufacturers for use in various end products in North America, Europe, Latin America, and Asia. The company operates through three segments: Surfactants, Polymers, and Specialty Products. 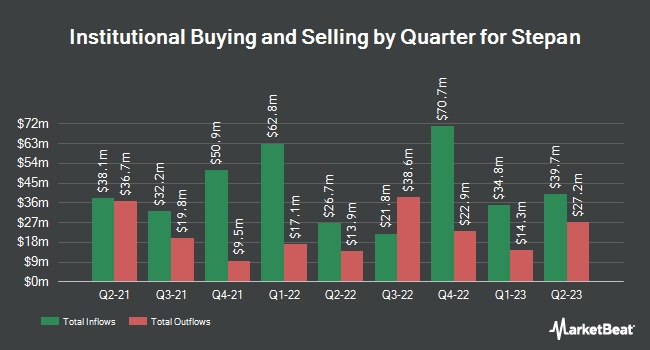 Receive News & Ratings for Stepan Daily - Enter your email address below to receive a concise daily summary of the latest news and analysts' ratings for Stepan and related companies with MarketBeat.com's FREE daily email newsletter.