Complete the form below to receive the latest headlines and analysts' recommendations for Winnebago Industries with our free daily email newsletter:

Winnebago Industries (NYSE:WGO) issued its quarterly earnings data on Wednesday. The construction company reported $0.67 EPS for the quarter, hitting the consensus estimate of $0.67, MarketWatch Earnings reports. Winnebago Industries had a net margin of 4.98% and a return on equity of 17.07%. The firm had revenue of $626.00 million for the quarter, compared to analyst estimates of $614.00 million. During the same period in the prior year, the business posted $0.68 EPS. The business’s revenue for the quarter was up 44.7% compared to the same quarter last year.

The company also recently disclosed a quarterly dividend, which will be paid on Wednesday, April 29th. Shareholders of record on Wednesday, April 15th will be given a $0.11 dividend. This represents a $0.44 dividend on an annualized basis and a dividend yield of 1.51%. The ex-dividend date is Tuesday, April 14th. Winnebago Industries’s dividend payout ratio is presently 12.79%. 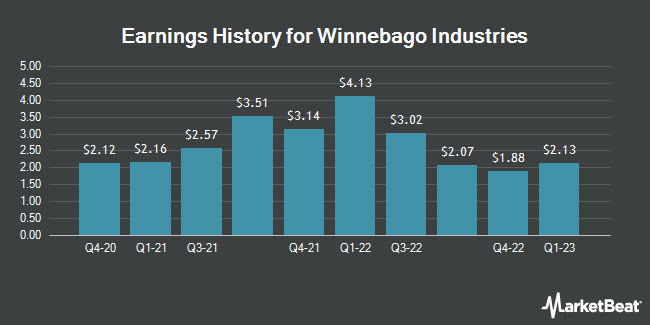