Complete the form below to receive the latest headlines and analysts' recommendations for SmileDirectClub with our free daily email newsletter:

ValuEngine upgraded shares of SmileDirectClub (NASDAQ:SDC) from a hold rating to a buy rating in a research note released on Thursday morning, ValuEngine reports.

SmileDirectClub (NASDAQ:SDC) last announced its quarterly earnings results on Tuesday, February 25th. The company reported ($0.25) earnings per share for the quarter, missing analysts’ consensus estimates of ($0.09) by ($0.16). The business had revenue of $196.71 million for the quarter, compared to analyst estimates of $198.50 million. On average, equities research analysts predict that SmileDirectClub will post -0.8 EPS for the current year.

In other news, Director Richard F. Wallman purchased 8,000 shares of the firm’s stock in a transaction that occurred on Monday, March 16th. The stock was bought at an average price of $5.44 per share, for a total transaction of $43,520.00.

SmileDirectClub, Inc operates a teledentistry platform that provides member's with a customized clear aligner therapy treatment in the United States and internationally. The company manages the end-to-end process, which include marketing, aligner manufacturing, fulfillment, treatment by a doctor, and monitoring through completion of their treatment proprietary with a network of approximately 240 state licensed orthodontists and general dentists through its teledentistry platform, SmileCheck. 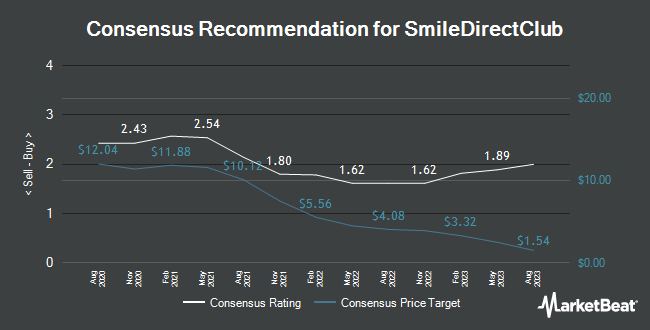