Complete the form below to receive the latest headlines and analysts' recommendations for SkyWest with our free daily email newsletter:

ValuEngine cut shares of SkyWest (NASDAQ:SKYW) from a sell rating to a strong sell rating in a report published on Thursday, ValuEngine reports.

SkyWest (NASDAQ:SKYW) last announced its quarterly earnings results on Thursday, January 30th. The transportation company reported $1.43 EPS for the quarter, beating the Thomson Reuters’ consensus estimate of $1.41 by $0.02. The business had revenue of $743.59 million for the quarter, compared to analyst estimates of $737.39 million. SkyWest had a return on equity of 15.39% and a net margin of 11.44%. SkyWest’s quarterly revenue was down 7.5% on a year-over-year basis. During the same quarter in the previous year, the firm earned $1.28 EPS. On average, analysts expect that SkyWest will post 4.07 earnings per share for the current year.

The company also recently announced a quarterly dividend, which will be paid on Monday, April 6th. Stockholders of record on Tuesday, March 31st will be given a dividend of $0.14 per share. The ex-dividend date of this dividend is Monday, March 30th. This represents a $0.56 dividend on an annualized basis and a dividend yield of 2.49%. This is an increase from SkyWest’s previous quarterly dividend of $0.12. SkyWest’s payout ratio is presently 8.96%.

See Also: Why does the United States have a lingering trade deficit? 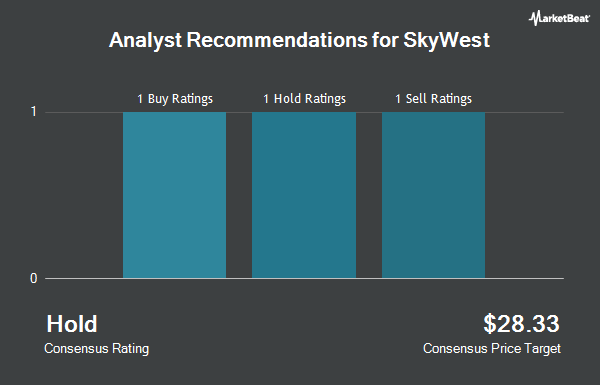 Receive News & Ratings for SkyWest Daily - Enter your email address below to receive a concise daily summary of the latest news and analysts' ratings for SkyWest and related companies with MarketBeat.com's FREE daily email newsletter.