Complete the form below to receive the latest headlines and analysts' recommendations for Humana with our free daily email newsletter:

Humana (NYSE:HUM) had its price target increased by equities research analysts at SunTrust Banks from $400.00 to $440.00 in a report issued on Thursday, BenzingaRatingsTable reports. The brokerage currently has a “hold” rating on the insurance provider’s stock. SunTrust Banks’ target price would suggest a potential upside of 11.55% from the stock’s previous close.

Humana (NYSE:HUM) last posted its earnings results on Wednesday, April 29th. The insurance provider reported $5.40 EPS for the quarter, beating the Zacks’ consensus estimate of $4.84 by $0.56. The firm had revenue of $18.94 billion for the quarter, compared to the consensus estimate of $18.49 billion. Humana had a net margin of 3.86% and a return on equity of 21.02%. The company’s revenue was up 17.6% on a year-over-year basis. During the same period last year, the firm posted $4.48 EPS. On average, equities analysts expect that Humana will post 18.55 EPS for the current year.

Humana Inc, together with its subsidiaries, operates as a health and well-being company in the United States. The company offers medical and supplemental benefit plans to individuals. It also has contract with Centers for Medicare and Medicaid Services to administer the Limited Income Newly Eligible Transition prescription drug plan program; and contracts with various states to provide Medicaid, dual eligible, and long-term support services benefits.

Featured Article: What does an outperform rating mean? 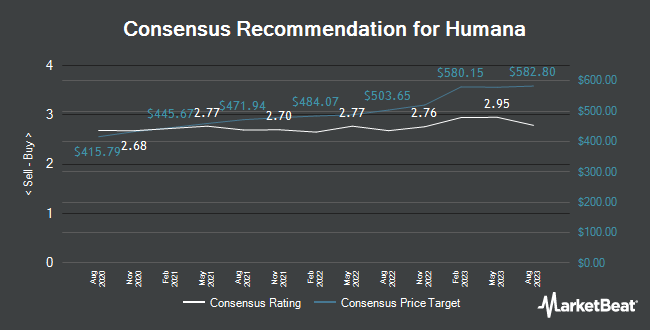 Receive News & Ratings for Humana Daily - Enter your email address below to receive a concise daily summary of the latest news and analysts' ratings for Humana and related companies with MarketBeat.com's FREE daily email newsletter.