Complete the form below to receive the latest headlines and analysts' recommendations for Kaman with our free daily email newsletter:

Kaman Co. (NYSE:KAMN) Director E Reeves Callaway III sold 1,000 shares of the company’s stock in a transaction on Tuesday, June 2nd. The shares were sold at an average price of $40.30, for a total value of $40,300.00. Following the sale, the director now owns 7,978 shares of the company’s stock, valued at $321,513.40. The transaction was disclosed in a filing with the SEC, which is accessible through the SEC website.

Kaman (NYSE:KAMN) last issued its earnings results on Monday, May 11th. The industrial products company reported $0.48 earnings per share (EPS) for the quarter, topping analysts’ consensus estimates of $0.37 by $0.11. Kaman had a return on equity of 6.93% and a net margin of 24.42%. The business had revenue of $207.32 million during the quarter, compared to analysts’ expectations of $182.09 million. During the same quarter in the prior year, the firm earned $0.57 EPS. The business’s revenue for the quarter was down 54.7% compared to the same quarter last year. Sell-side analysts anticipate that Kaman Co. will post 2.09 EPS for the current fiscal year.

Featured Story: What is Depreciation? 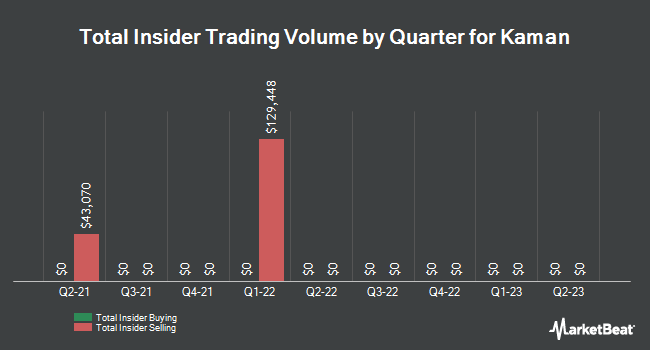 Receive News & Ratings for Kaman Daily - Enter your email address below to receive a concise daily summary of the latest news and analysts' ratings for Kaman and related companies with MarketBeat.com's FREE daily email newsletter.

Alphabet Inc Given Average Rating of “Buy” by Analysts

Intertape Polymer Group Given Consensus Rating of “Buy” by Analysts