Complete the form below to receive the latest headlines and analysts' recommendations for Etsy with our free daily email newsletter:

Stock analysts at SunTrust Banks started coverage on shares of Etsy (NASDAQ:ETSY) in a report released on Friday, The Fly reports. The brokerage set a “buy” rating and a $112.00 price target on the specialty retailer’s stock. SunTrust Banks’ target price would indicate a potential upside of 9.23% from the stock’s previous close.

Etsy (NASDAQ:ETSY) last issued its quarterly earnings results on Wednesday, May 6th. The specialty retailer reported $0.10 earnings per share for the quarter, missing the Zacks’ consensus estimate of $0.18 by ($0.08). Etsy had a net margin of 8.76% and a return on equity of 18.68%. The company had revenue of $228.05 million during the quarter, compared to analysts’ expectations of $219.34 million. During the same period in the prior year, the business posted $0.24 earnings per share. The company’s quarterly revenue was up 34.7% compared to the same quarter last year. On average, research analysts forecast that Etsy will post 1.05 EPS for the current year.

Etsy, Inc operates Etsy.com, a commerce platform to make, sell, and buy goods online and offline primarily in the United States, United Kingdom, Canada, Australia, France, and Germany. It provides various seller services and tools that are designed to help entrepreneurs for starting, managing, and scaling their businesses. 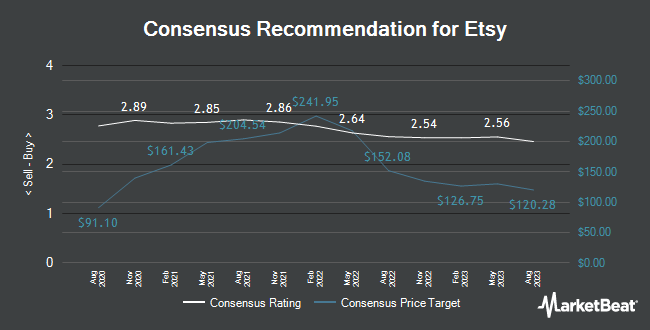 Receive News & Ratings for Etsy Daily - Enter your email address below to receive a concise daily summary of the latest news and analysts' ratings for Etsy and related companies with MarketBeat.com's FREE daily email newsletter.