Complete the form below to receive the latest headlines and analysts' recommendations for J M Smucker with our free daily email newsletter:

Wall Street analysts expect that J M Smucker Co (NYSE:SJM) will post sales of $1.81 billion for the current quarter, according to Zacks Investment Research. Four analysts have made estimates for J M Smucker’s earnings, with estimates ranging from $1.79 billion to $1.82 billion. J M Smucker reported sales of $1.78 billion during the same quarter last year, which would suggest a positive year-over-year growth rate of 1.7%. The business is expected to issue its next earnings results on Tuesday, August 25th.

According to Zacks, analysts expect that J M Smucker will report full year sales of $7.67 billion for the current financial year, with estimates ranging from $7.63 billion to $7.70 billion. For the next financial year, analysts expect that the company will report sales of $7.76 billion, with estimates ranging from $7.67 billion to $7.85 billion. Zacks’ sales calculations are a mean average based on a survey of sell-side research analysts that that provide coverage for J M Smucker.

J M Smucker (NYSE:SJM) last issued its quarterly earnings data on Thursday, June 4th. The company reported $2.57 earnings per share (EPS) for the quarter, beating the Zacks’ consensus estimate of $2.28 by $0.29. J M Smucker had a return on equity of 12.31% and a net margin of 9.99%. The company had revenue of $2.09 billion during the quarter, compared to analysts’ expectations of $2.05 billion. During the same period last year, the business earned $2.08 earnings per share. The business’s revenue was up 10.0% on a year-over-year basis.

The J. M. Smucker Co engages in the manufacture and marketing of branded food and beverage products. It operates through the following segments: U.S. Retail Coffee, U.S. Retail Consumer Foods, U.S. Retail Pet Foods, and International and Away From Home. The U. S. Retail Coffee segment includes the domestic sales of Folgers, Dunkin Donuts, and Cafe Bustelo branded coffee.

Featured Article: Why Dividend Stocks May Be Right for You 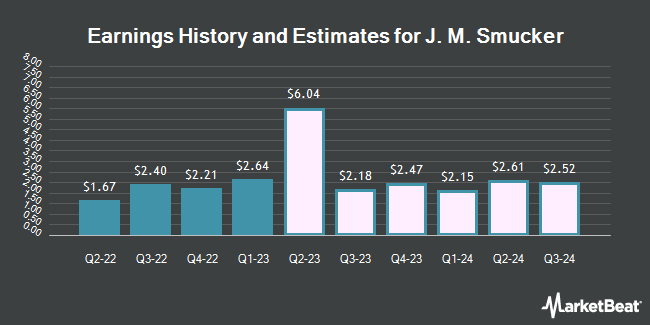