Complete the form below to receive the latest headlines and analysts' recommendations for Translate Bio with our free daily email newsletter:

Zacks Investment Research upgraded shares of Translate Bio (NASDAQ:TBIO) from a hold rating to a strong-buy rating in a report released on Wednesday morning, Zacks.com reports. The firm currently has $22.00 price objective on the stock.

According to Zacks, “Translate Bio, Inc. operates as a therapeutics company. It develops transformative medicines for the treatment of diseases caused by protein and gene dysfunction. Translate Bio, Inc. is based in MA, United States. “

Translate Bio (NASDAQ:TBIO) last released its quarterly earnings data on Thursday, May 7th. The company reported ($0.24) EPS for the quarter, topping analysts’ consensus estimates of ($0.44) by $0.20. The business had revenue of $4.65 million during the quarter, compared to the consensus estimate of $2.23 million. Translate Bio had a negative return on equity of 63.61% and a negative net margin of 859.22%. Research analysts expect that Translate Bio will post -1.47 EPS for the current year.

In other news, major shareholder Baupost Group Llc/Ma purchased 500,000 shares of the company’s stock in a transaction on Friday, June 26th. The shares were bought at an average price of $22.00 per share, for a total transaction of $11,000,000.00. The purchase was disclosed in a document filed with the Securities & Exchange Commission, which is available at the SEC website. Also, major shareholder Human Genetic Therapies Shire sold 40,086 shares of the firm’s stock in a transaction that occurred on Wednesday, June 3rd. The shares were sold at an average price of $19.75, for a total transaction of $791,698.50. The disclosure for this sale can be found here. Insiders sold 6,973,550 shares of company stock worth $144,086,787 in the last three months. 12.30% of the stock is currently owned by corporate insiders.

Translate Bio, Inc, a clinical-stage messenger RNA (mRNA) therapeutics company, develops medicines to treat diseases caused by protein or gene dysfunction. The company is developing MRT5005, which is in Phase I/II clinical trial for the treatment of cystic fibrosis; and MRT5201 to treat ornithine transcarbamylase deficiency. 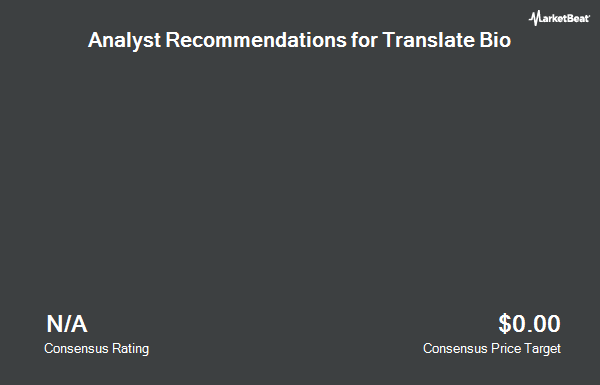