Complete the form below to receive the latest headlines and analysts' recommendations for Interface with our free daily email newsletter:

Analysts predict that Interface, Inc. (NASDAQ:TILE) will report sales of $250.93 million for the current fiscal quarter, according to Zacks. Three analysts have provided estimates for Interface’s earnings, with the lowest sales estimate coming in at $245.00 million and the highest estimate coming in at $257.50 million. Interface posted sales of $357.51 million in the same quarter last year, which would indicate a negative year-over-year growth rate of 29.8%. The company is expected to issue its next quarterly earnings report on Thursday, July 23rd.

According to Zacks, analysts expect that Interface will report full-year sales of $1.10 billion for the current year, with estimates ranging from $1.10 billion to $1.11 billion. For the next financial year, analysts forecast that the company will report sales of $1.23 billion, with estimates ranging from $1.22 billion to $1.25 billion. Zacks’ sales averages are a mean average based on a survey of sell-side research firms that that provide coverage for Interface.

Interface (NASDAQ:TILE) last announced its quarterly earnings data on Friday, May 8th. The textile maker reported $0.32 EPS for the quarter, topping the Zacks’ consensus estimate of $0.20 by $0.12. The firm had revenue of $288.20 million during the quarter, compared to analyst estimates of $298.13 million. Interface had a positive return on equity of 31.53% and a negative net margin of 2.25%. The company’s revenue was down 3.3% on a year-over-year basis. During the same period last year, the company earned $0.12 earnings per share.

The firm also recently disclosed a quarterly dividend, which was paid on Friday, June 19th. Stockholders of record on Friday, June 5th were issued a dividend of $0.01 per share. This represents a $0.04 annualized dividend and a dividend yield of 0.53%. The ex-dividend date of this dividend was Thursday, June 4th. Interface’s dividend payout ratio (DPR) is presently 2.52%.

Interface, Inc, a modular flooring company, designs, produces, and sells modular carpet products primarily in the Americas, Europe, and the Asia-Pacific. The company offers modular carpets under the Interface and FLOR names; carpet tiles under the GlasBacRE name for use in commercial interiors, including offices, healthcare facilities, airports, educational and other institutions, hospitality spaces, and retail facilities, as well as residential interiors; modular resilient flooring products; rubber flooring under the norament and noraplan brands; and luxury vinyl tile products.

Featured Story: What is total return in investing? 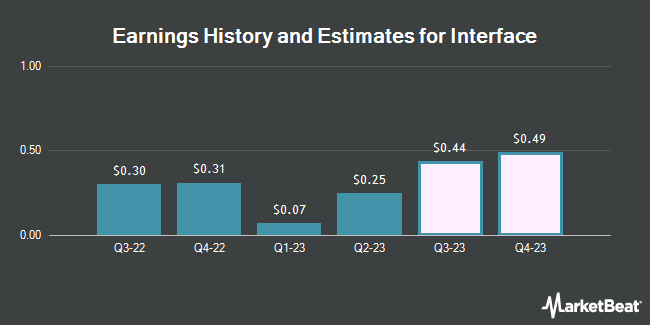