Complete the form below to receive the latest headlines and analysts' recommendations for Apple with our free daily email newsletter:

In other news, insider Chris Kondo sold 4,491 shares of Apple stock in a transaction dated Friday, May 8th. The stock was sold at an average price of $305.62, for a total transaction of $1,372,539.42. Following the completion of the sale, the insider now directly owns 7,370 shares in the company, valued at approximately $2,252,419.40. The sale was disclosed in a filing with the SEC, which can be accessed through this link. Also, SVP Deirdre O’brien sold 9,137 shares of the business’s stock in a transaction that occurred on Thursday, April 16th. The shares were sold at an average price of $285.12, for a total value of $2,605,141.44. The disclosure for this sale can be found here. 0.05% of the stock is currently owned by corporate insiders.

Apple (NASDAQ:AAPL) last posted its earnings results on Thursday, April 30th. The iPhone maker reported $2.55 EPS for the quarter, topping the consensus estimate of $2.26 by $0.29. The firm had revenue of $58.31 billion during the quarter, compared to analysts’ expectations of $54.64 billion. Apple had a net margin of 21.35% and a return on equity of 64.49%. Apple’s quarterly revenue was up .5% on a year-over-year basis. During the same quarter in the prior year, the firm earned $2.46 EPS. On average, equities analysts anticipate that Apple will post 12.32 earnings per share for the current year. 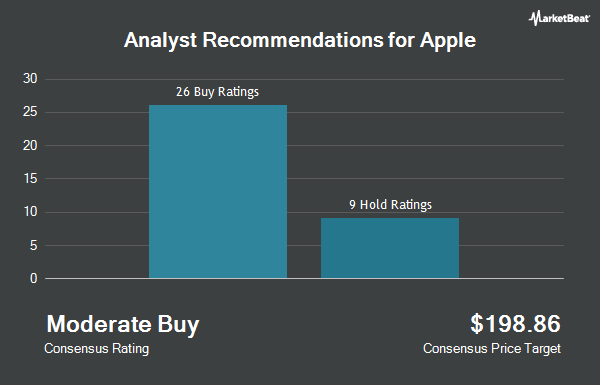 Receive News & Ratings for Apple Daily - Enter your email address below to receive a concise daily summary of the latest news and analysts' ratings for Apple and related companies with MarketBeat.com's FREE daily email newsletter.