Complete the form below to receive the latest headlines and analysts' recommendations for Wingstop with our free daily email newsletter:

Wingstop (NASDAQ:WING) issued its quarterly earnings results on Wednesday. The restaurant operator reported $0.39 EPS for the quarter, topping analysts’ consensus estimates of $0.29 by $0.10, MarketWatch Earnings reports. The company had revenue of $66.10 million during the quarter, compared to analyst estimates of $62.46 million. Wingstop had a negative return on equity of 14.61% and a net margin of 12.73%. The company’s quarterly revenue was up 36.0% compared to the same quarter last year. During the same period in the previous year, the company earned $0.17 earnings per share.

The company also recently declared a quarterly dividend, which will be paid on Friday, September 11th. Investors of record on Friday, August 28th will be issued a dividend of $0.14 per share. This is a boost from Wingstop’s previous quarterly dividend of $0.11. This represents a $0.56 annualized dividend and a yield of 0.36%. The ex-dividend date of this dividend is Thursday, August 27th. Wingstop’s dividend payout ratio (DPR) is presently 60.27%.

Wingstop Inc, together with its subsidiaries, franchises and operates restaurants under the Wingstop brand name. Its restaurants offer cooked-to-order, hand-sauced, and tossed chicken wings. As of December 29, 2018, the company operated approximately 1,252 restaurants in the United States, Mexico, Panama, Singapore, Indonesia, the United Arab Emirates, the United Kingdom, Malaysia, Saudi Arabia, and Colombia. 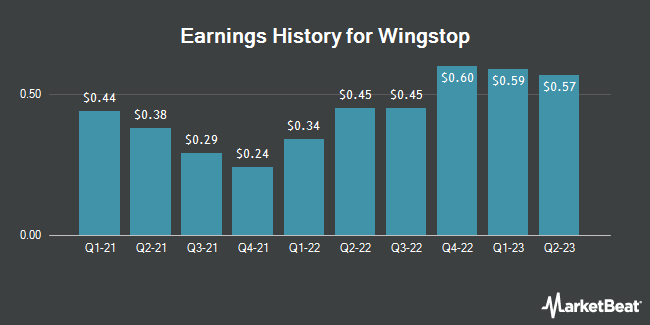 Receive News & Ratings for Wingstop Daily - Enter your email address below to receive a concise daily summary of the latest news and analysts' ratings for Wingstop and related companies with MarketBeat.com's FREE daily email newsletter.