Complete the form below to receive the latest headlines and analysts' recommendations for X4 Pharmaceuticals with our free daily email newsletter:

X4 Pharmaceuticals (NASDAQ:XFOR) posted its earnings results on Thursday. The company reported ($0.76) earnings per share (EPS) for the quarter, missing the Thomson Reuters’ consensus estimate of ($0.70) by ($0.06), MarketWatch Earnings reports.

In related news, CEO Paula Ragan sold 4,275 shares of the firm’s stock in a transaction that occurred on Monday, June 1st. The shares were sold at an average price of $8.63, for a total transaction of $36,893.25. The sale was disclosed in a filing with the Securities & Exchange Commission, which is accessible through the SEC website. Insiders sold 20,507 shares of company stock valued at $181,813 over the last ninety days. Corporate insiders own 4.90% of the company’s stock. 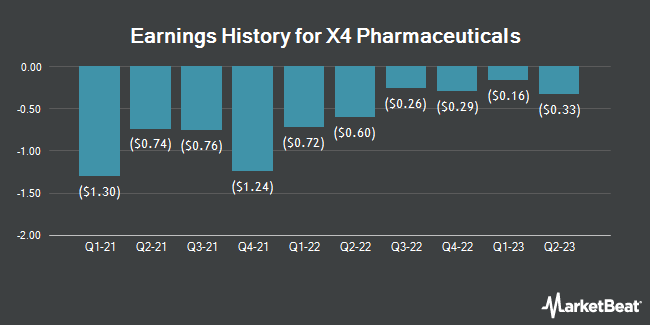