Complete the form below to receive the latest headlines and analysts' recommendations for East West Bancorp with our free daily email newsletter:

East West Bancorp, Inc. (NASDAQ:EWBC) declared a quarterly dividend on Thursday, July 23rd, RTT News reports. Shareholders of record on Tuesday, August 4th will be paid a dividend of 0.275 per share by the financial services provider on Monday, August 17th. This represents a $1.10 dividend on an annualized basis and a yield of 3.17%. The ex-dividend date is Monday, August 3rd.

East West Bancorp, Inc operates as the bank holding company for East West Bank that provides a range of personal and commercial banking services to businesses and individuals in the United States and Greater China. It operates in three segments: Consumer and Business Banking, Commercial Banking, and Other.

Featured Article: What is Considered a Good Return on Equity (ROE)? 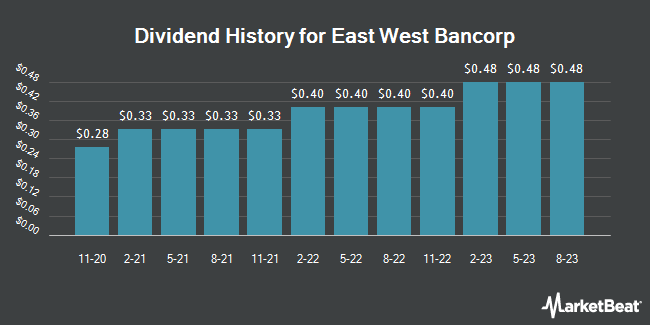