American Tower Corp (NYSE:AMT) Director David E. Sharbutt sold 973 shares of the stock in a transaction that occurred on Monday, September 14th. The stock was sold at an average price of $255.27, for a total value of $248,377.71. Following the sale, the director now directly owns 763 shares of the company’s stock, valued at $194,771.01. The transaction was disclosed in a document filed with the SEC, which is available at the SEC website.

The business also recently declared a quarterly dividend, which will be paid on Friday, October 16th. Shareholders of record on Monday, September 28th will be given a dividend of $1.14 per share. This is an increase from American Tower’s previous quarterly dividend of $1.10. The ex-dividend date is Friday, September 25th. This represents a $4.56 annualized dividend and a yield of 1.73%. American Tower’s dividend payout ratio (DPR) is presently 56.92%. 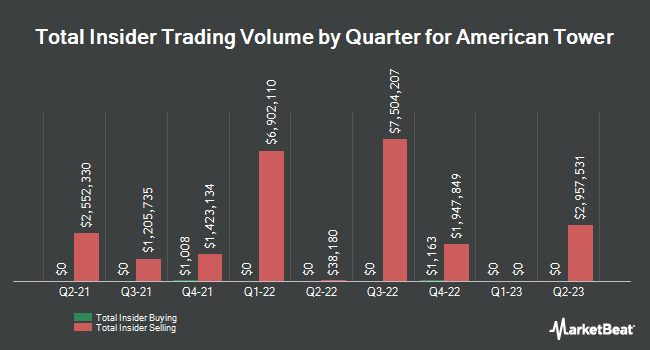