Complete the form below to receive the latest headlines and analysts' recommendations for American Water Works with our free daily email newsletter:

According to Zacks, analysts expect that American Water Works will report full-year sales of $3.74 billion for the current year, with estimates ranging from $3.71 billion to $3.78 billion. For the next fiscal year, analysts expect that the firm will post sales of $3.92 billion, with estimates ranging from $3.87 billion to $4.01 billion. Zacks Investment Research’s sales averages are an average based on a survey of analysts that follow American Water Works.

American Water Works (NYSE:AWK) last released its quarterly earnings results on Wednesday, August 5th. The utilities provider reported $0.97 EPS for the quarter, beating the consensus estimate of $0.96 by $0.01. American Water Works had a net margin of 17.29% and a return on equity of 10.79%. The firm had revenue of $931.00 million during the quarter, compared to the consensus estimate of $916.88 million.

The company also recently declared a quarterly dividend, which was paid on Tuesday, September 1st. Stockholders of record on Wednesday, August 12th were paid a dividend of $0.55 per share. This represents a $2.20 annualized dividend and a dividend yield of 1.54%. The ex-dividend date of this dividend was Tuesday, August 11th. American Water Works’s dividend payout ratio (DPR) is presently 60.94%.

Read More: Dogs of the Dow 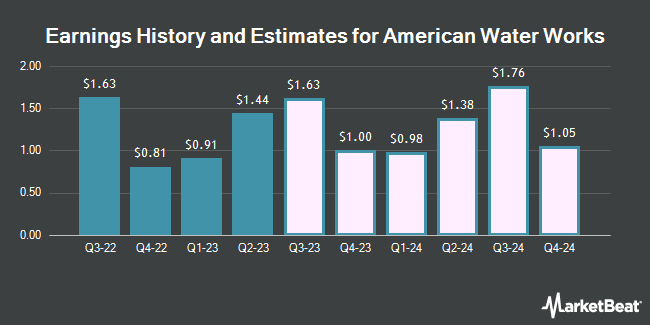