Complete the form below to receive the latest headlines and analysts' recommendations for Store Capital with our free daily email newsletter:

Store Capital (NYSE:STOR) last issued its quarterly earnings results on Wednesday, August 5th. The real estate investment trust reported $0.16 EPS for the quarter, missing the Thomson Reuters’ consensus estimate of $0.44 by ($0.28). Store Capital had a net margin of 39.73% and a return on equity of 6.06%. The business had revenue of $168.30 million during the quarter, compared to analysts’ expectations of $163.81 million. During the same period in the prior year, the business earned $0.50 EPS. The business’s quarterly revenue was up 2.7% on a year-over-year basis. Equities analysts expect that Store Capital will post 1.85 earnings per share for the current fiscal year.

The business also recently declared a quarterly dividend, which will be paid on Thursday, October 15th. Stockholders of record on Wednesday, September 30th will be paid a $0.36 dividend. This is an increase from Store Capital’s previous quarterly dividend of $0.35. This represents a $1.44 dividend on an annualized basis and a dividend yield of 5.12%. The ex-dividend date of this dividend is Tuesday, September 29th. Store Capital’s dividend payout ratio (DPR) is presently 70.35%.

In other Store Capital news, CFO Catherine F. Long bought 3,960 shares of the business’s stock in a transaction that occurred on Wednesday, August 19th. The shares were acquired at an average cost of $25.23 per share, for a total transaction of $99,910.80. Following the transaction, the chief financial officer now directly owns 266,669 shares in the company, valued at $6,728,058.87. The purchase was disclosed in a legal filing with the Securities & Exchange Commission, which is available through this link. Company insiders own 0.84% of the company’s stock.

STORE Capital Corporation is an internally managed net-lease real estate investment trust, or REIT, that is the leader in the acquisition, investment and management of Single Tenant Operational Real Estate, which is its target market and the inspiration for its name. STORE Capital is one of the largest and fastest growing net-lease REITs and owns a large, well-diversified portfolio that consists of investments in 2,255 property locations, substantially all of which are profit centers, in 49 states. 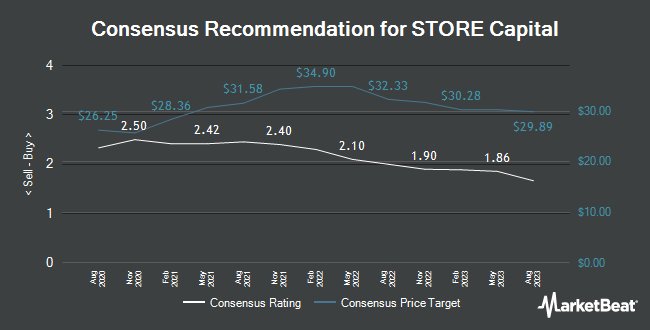