Complete the form below to receive the latest headlines and analysts' recommendations for Stitch Fix with our free daily email newsletter:

Stitch Fix (NASDAQ:SFIX) had its price objective hoisted by equities researchers at Truist from $28.00 to $34.00 in a note issued to investors on Wednesday, The Fly reports. Truist’s target price points to a potential upside of 25.74% from the stock’s current price.

Stitch Fix (NASDAQ:SFIX) last released its quarterly earnings data on Tuesday, September 22nd. The company reported ($0.44) EPS for the quarter, missing the Thomson Reuters’ consensus estimate of ($0.17) by ($0.27). The business had revenue of $443.40 million during the quarter, compared to the consensus estimate of $415.52 million. Stitch Fix had a negative return on equity of 3.71% and a negative net margin of 0.91%. The firm’s quarterly revenue was up 2.6% on a year-over-year basis. During the same period last year, the business posted $0.07 earnings per share. Sell-side analysts anticipate that Stitch Fix will post -0.41 EPS for the current year.

Stitch Fix, Inc sells a range of apparel, shoes, and accessories through its Website and mobile app in the United States. It offers denim, dresses, blouses, skirts, shoes, jewelry, and handbags for men, women, and kids under the Stitch Fix brand. The company was formerly known as rack habit inc. and changed its name to Stitch Fix, Inc in October 2011. 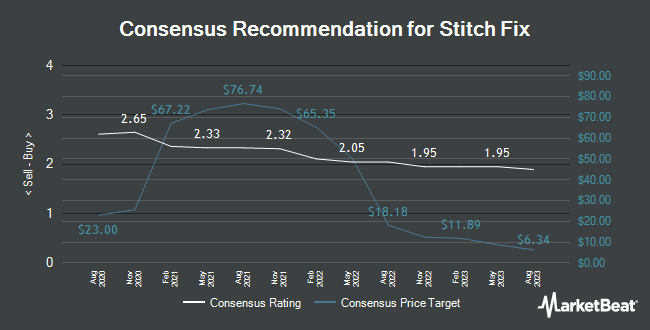