Analysts predict that CarParts.com, Inc. (NASDAQ:PRTS) will post $88.52 million in sales for the current quarter, Zacks reports. Two analysts have made estimates for CarParts.com’s earnings. The highest sales estimate is $99.46 million and the lowest is $77.58 million. CarParts.com posted sales of $69.27 million in the same quarter last year, which suggests a positive year-over-year growth rate of 27.8%. The company is scheduled to issue its next earnings results on Friday, November 6th.

CarParts.com (NASDAQ:PRTS) last released its quarterly earnings results on Monday, August 10th. The specialty retailer reported $0.03 earnings per share for the quarter, topping analysts’ consensus estimates of ($0.01) by $0.04. CarParts.com had a negative return on equity of 123.97% and a negative net margin of 7.65%. The firm had revenue of $118.93 million during the quarter, compared to the consensus estimate of $78.92 million.

In related news, major shareholder David Kanen sold 199,400 shares of the stock in a transaction on Monday, June 29th. The stock was sold at an average price of $8.87, for a total value of $1,768,678.00. The transaction was disclosed in a legal filing with the SEC, which is available at the SEC website. Also, VP Alfredo Gomez purchased 3,000 shares of the company’s stock in a transaction that occurred on Wednesday, August 19th. The stock was acquired at an average price of $14.84 per share, for a total transaction of $44,520.00. Following the purchase, the vice president now owns 126,483 shares in the company, valued at approximately $1,877,007.72. The disclosure for this purchase can be found here. In the last three months, insiders bought 16,130 shares of company stock valued at $202,027. 46.10% of the stock is currently owned by insiders.

CarParts.com, Inc, together with its subsidiaries, operates as an online provider of aftermarket auto parts and accessories primarily in the United States and the Philippines. It offers collision parts, such as parts for the exterior of an automobile; mirror products; engine parts comprising engine and chassis components, as well as other mechanical and electrical parts; and performance parts and accessories to individual consumers through its network of e-commerce Websites and online marketplaces.

Get a free copy of the Zacks research report on CarParts.com (PRTS) 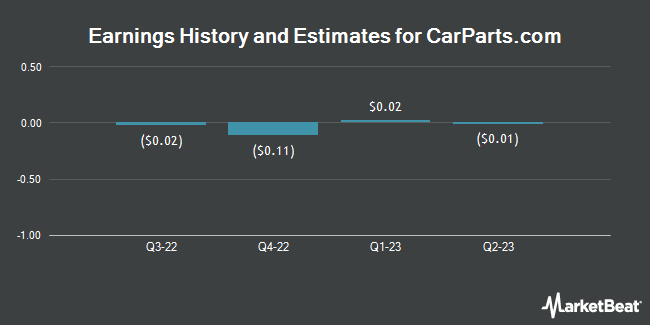