Complete the form below to receive the latest headlines and analysts' recommendations for Domino's Pizza with our free daily email newsletter:

Domino's Pizza (NYSE:DPZ) issued its quarterly earnings data on Tuesday. The restaurant operator reported $2.49 earnings per share for the quarter, missing the Thomson Reuters’ consensus estimate of $2.79 by ($0.30), MarketWatch Earnings reports. Domino's Pizza had a negative return on equity of 14.11% and a net margin of 11.98%. The company had revenue of $967.70 million for the quarter, compared to the consensus estimate of $954.92 million. During the same period in the previous year, the firm earned $2.05 earnings per share. The company’s revenue was up 17.9% compared to the same quarter last year.

The firm also recently declared a quarterly dividend, which will be paid on Wednesday, December 30th. Stockholders of record on Tuesday, December 15th will be given a dividend of $0.78 per share. This represents a $3.12 dividend on an annualized basis and a dividend yield of 0.78%. The ex-dividend date of this dividend is Monday, December 14th. Domino's Pizza’s payout ratio is presently 32.60%.

Domino's Pizza, Inc, through its subsidiaries, operates as a pizza delivery company in the United States and internationally. It operates through three segments: U.S. Stores, International Franchise, and Supply Chain. The company offers pizzas under the Domino's brand name through company-owned and franchised stores. 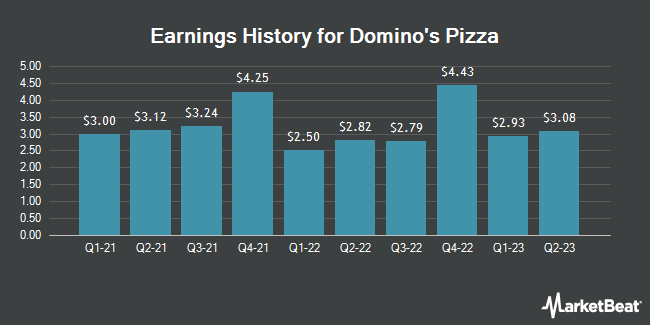