Complete the form below to receive the latest headlines and analysts' recommendations for Bank of New York Mellon with our free daily email newsletter:

Bank of New York Mellon (NYSE:BK) posted its earnings results on Friday. The bank reported $0.98 earnings per share for the quarter, topping the consensus estimate of $0.94 by $0.04, MarketWatch Earnings reports. The firm had revenue of $3.85 billion during the quarter, compared to the consensus estimate of $3.83 billion. Bank of New York Mellon had a net margin of 22.31% and a return on equity of 10.34%. The company’s revenue was down .4% on a year-over-year basis. During the same quarter last year, the company earned $1.07 earnings per share.

The business also recently announced a quarterly dividend, which will be paid on Tuesday, November 10th. Shareholders of record on Wednesday, October 28th will be given a dividend of $0.31 per share. This represents a $1.24 annualized dividend and a yield of 3.26%. Bank of New York Mellon’s payout ratio is presently 30.85%.

In other Bank of New York Mellon news, EVP Mitchell E. Harris sold 35,000 shares of Bank of New York Mellon stock in a transaction that occurred on Wednesday, July 22nd. The shares were sold at an average price of $35.75, for a total transaction of $1,251,250.00. Following the completion of the sale, the executive vice president now directly owns 145,425 shares in the company, valued at $5,198,943.75. The sale was disclosed in a document filed with the SEC, which is available at the SEC website. Insiders own 0.12% of the company’s stock.

Featured Story: How does a security become overbought? 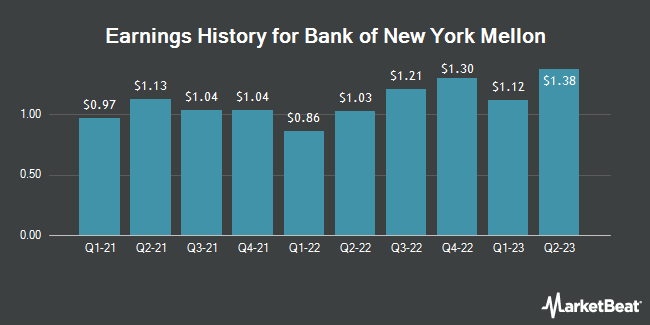 COMWLTH BK AUS/S and Its Peers Head to Head Contrast

Comparing Eloxx Pharmaceuticals and Its Rivals