Complete the form below to receive the latest headlines and analysts' recommendations for Coca-Cola FEMSA with our free daily email newsletter:

Coca-Cola FEMSA (NYSE:KOF) last released its quarterly earnings results on Wednesday, July 22nd. The company reported $0.43 earnings per share for the quarter, missing the consensus estimate of $0.61 by ($0.18). The company had revenue of $1.85 billion during the quarter, compared to the consensus estimate of $1.90 billion. Coca-Cola FEMSA had a net margin of 5.72% and a return on equity of 8.40%. On average, research analysts predict that Coca-Cola FEMSA will post 2.4 EPS for the current year.

Several analysts recently weighed in on the stock. Zacks Investment Research cut shares of Coca-Cola FEMSA from a “hold” rating to a “strong sell” rating in a report on Wednesday, September 23rd. Barclays cut shares of Coca-Cola FEMSA from an “overweight” rating to an “equal weight” rating in a report on Monday, July 13th. One research analyst has rated the stock with a sell rating, three have given a hold rating and three have issued a buy rating to the stock. The company has a consensus rating of “Hold” and a consensus price target of $65.00. 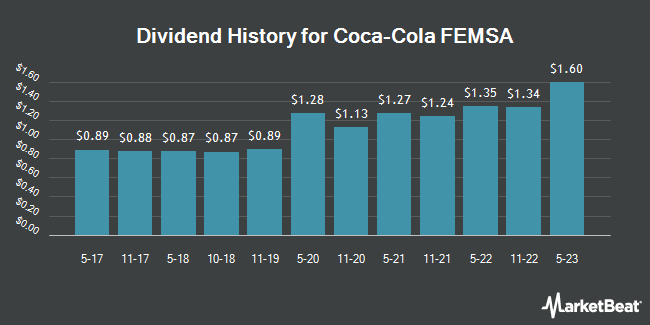